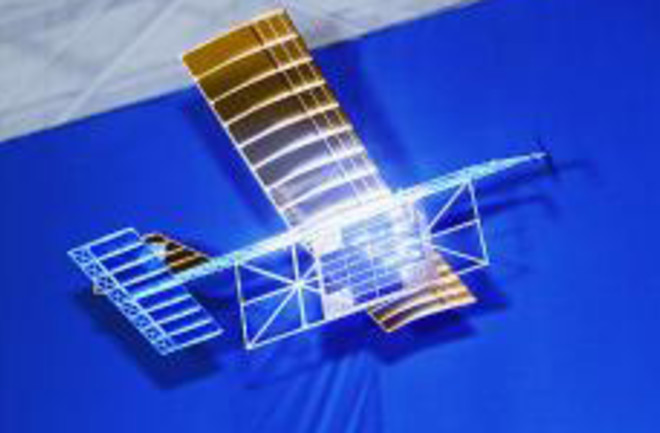 Engineers at NASA’s Dryden Flight Research Center in California have developed and flown an aircraft that needs no fuel: It is powered entirely by laser light beamed from the ground.

“We were trying to think up ways to keep aircraft going for long periods of time,” says engineer David Bushman, project manager for the flight demonstration. Insufficient fuel is the main obstacle to long-duration flight, so Bushman and his colleagues developed a model plane that gets its power from wing-mounted photovoltaic cells wired to the craft’s propeller.

As long as an infrared laser is trained on the plane, the cells send enough electricity to the propeller to keep the craft flying.

The maiden voyage of the 11-ounce laser plane lasted just 15 minutes; moreover, its test flight was conducted indoors to avoid problems created by wind or bad weather. But NASA engineers are confident the same principle can be applied to larger aircraft operating under real-world conditions.

The laser system could be used to keep high-altitude telecommunications aircraft aloft indefinitely or even to propel spaceships, Bushman says: “To fly such an airplane at a high altitude is certainly reasonable. Laser technology, photovoltaic technology, and aircraft technology have advanced to the point where we can make this happen.”