Life and Love in the Uncanny Valley 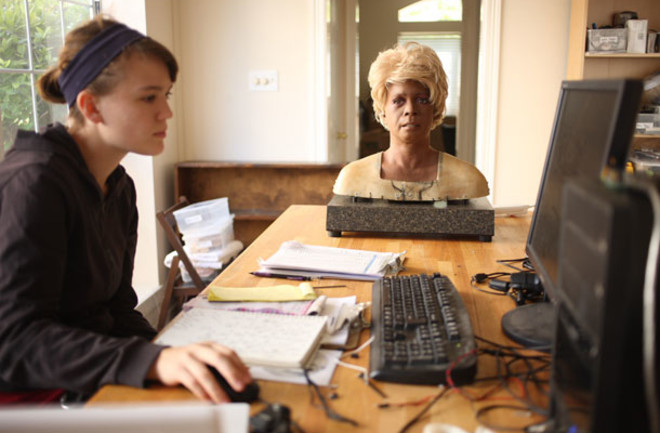 David Hanson's robots are by now somewhat familiar faces, including his Einstein robot currently being used as a research tool at Javier Movellan's Machine Perception Lab at UCSD, and the punk rock conversationalist Joey Chaos. A less familiar face is that of Bina Rothblatt, the blonde at the end of the table in the above photograph. Bina is a robot commissioned by Sirius Satellite Radio inventor Martine Rothblatt to look like her beloved wife. Take that, uncanny valley!

Photographer Timothy Archibald and I worked closely on this project with the idea of creating portraits, and maybe a kind of family portrait, of the Hanson robots. After flying to Texas to shoot Hanson and robots at his home and workshop in Dallas, Texas, Archibald wrote to me.

"Here is a big house in a Texas suburb that looks normal on the outside. On the inside it is robot making company made up of a floating array of 9-12 employees sculpting things, working on the electrical stuff and writing code for software...taking over the living room, den, kitchen, etc. On the upstairs level is where Hanson, his wife and 3 year old live. They they are in month three of this arrangement. There is no down time. People trickle in at 11:00 AM and stay until 1-3 AM everyday including weekends. They are cranking right now, trying to hit deadlines with The Android Portrait of Bina Rothblatt as well as a potential consumer robot called ZENO. Curiously, Hanson's son is also named Zeno. There is a story on how that came to be, of course..."

To see more photography from this story, check out DISCOVER magazine's May 2010 issue on newsstands now.

Katherine Batiste of Hanson Robotics working on a computer with "An Android Portrait Of Bina Rothblatt" sits on the table.

Detail of Zeno, Hanson's prototype robot for the consumer market.