Lend a Hand, C3P0? Self-Loading Luggage is on the Air Force's Wishlist 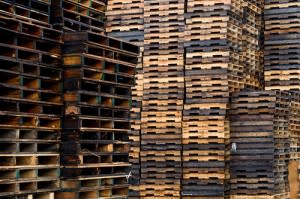 Let's get these suckers some ROBOTS.

Here, robots, you take over---the Air Force is pooped. They've been hauling the military's stuff all over the place for decades, and in their weary dreams, they see a cargo pallet---those platforms upon which everything from bricks to heavy machinery is packed and shipped---that can trundle around on its own, take orders from remote humans, maneuver in tight spaces, and play nicely with other equipment the Air Forces uses for shipping. And they're determined to make that dream a reality. The Air Force recently hired two companies to come up with these magic pallets. HSTAR Technologies is working on a platform that can talk to a central dispatcher and is endowed with omnidirectional wheels for spinning around in close quarters. Presumably they will be applying their lifting expertise---they develop robots that appear to be designed for helping medical personnel lift and move patients, though their site

is planning a device based on the standard pallet already used by the military, the 463L, which will drive it wherever it needs to go and communicate with the bosses and other cargo bots. They're ambitious: Stratom's proposal says the tech should be transferable to handling cargo and baggage in commercial air travel. Perhaps Fluffy's dog carrier will someday be chivvied around the tarmac by a robot instead of an orange-vested man with a miniature train. Wired's Danger Room has a cool rundown

on the other ways the military is replacing human grunt work with robotic savvy. Our favorites: the creepy, goosestepping BigDog

, which resembles a duffel bag fused to four human legs, and Lockheed's HULC

, the exoskeleton that lets you carry 200 lbs by transferring the weight to the ground. Next to this stuff, robo-pallets should be a cinch.