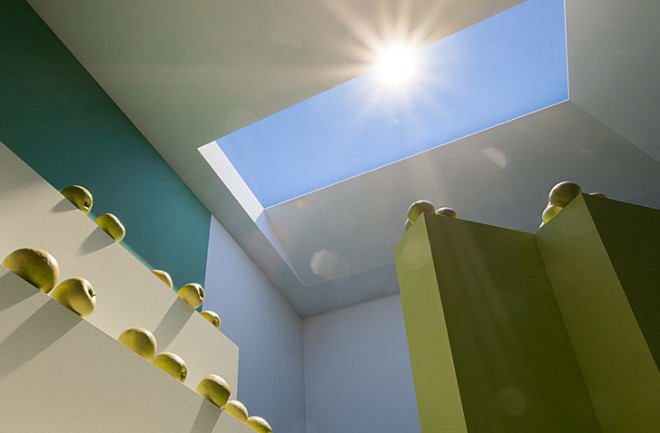 CoeLux's artificial light will allow people to turn every day into a sunny day. (Credit: CoeLux) Sunlight is a key factor architects take into account in their designs, but in most cases, they're pretty much at the mercy of Mother Nature to provide it. However a new innovation may be set to change that. An Italian company called CoeLux has developed an LED light that impeccably recreates the appearance of sunlight — so well that both human brains and cameras can’t tell the difference. Designers captured the color temperature and intensity of sunlight by recreating the same natural conditions that exist in Earth’s atmosphere, but on a nano scale.

Skylights for Any Room

When we step outside on a sunny day, the light that reaches us is actually filtered through the carbon dioxide, oxygen and nitrogen molecules that make up the atmosphere. The excited molecules scatter the blue light — the smallest wavelength — more intensely than colors with larger wavelengths. This effect, known as Rayleigh scattering, is the reason the sky is blue. Using nanoparticles, CoeLux designers essentially compressed six miles of Earth’s atmosphere into a few millimeters to artificially recreate Rayleigh scattering. And rather than a gas, CoeLux’s light source passes through a solid layer. The light itself is an LED projector that emits white light in a spectrum that mimics the sun's output. A "sophisticated optical system" (but with few details provided) creates the sensation of the distance between the sky and the sun. What results is stunningly close to looking at the sun through a real skylight (CoeLux even makes a point to assert its website photos aren’t doctored in any way). Buyers can even choose from one of three different types of sunlight: tropical, Mediterranean and Nordic. Each setting is a different color temperature, and the sun shines through at a different angle. http://youtu.be/aJ4TJ4-kkDw

Access to natural light has been shown to have myriad health benefits. If CoeLux's design is convincing enough, it could be not just a beautiful addition to a room but a highly practical one too. CoeLux envisions its lights appearing in hospitals, windowless offices and basements hundreds of feet below ground. The lights are also useful for photographers that are looking to shoot in-studio photos with natural light. The only downside for these lights, right now at least, is their price: roughly $61,000 plus $7,000 for installation.

A dress bathed in "sunlight." (Credit: CoeLux) As with any technological innovation, the price will surely come down as production is more streamlined. In future versions of the their skylight, CoeLux will allow you to toggle the position of the sun and adjust its color temperature, rather than just choosing a preset flavor of sunlight. So, after the apocalypse, when all of humanity is forced to live in underground dwellings, take heart: There may still be sunlight to bask in.