Laser-Equipped Wheelchairs Let the Blind "See" Obstacles in Their Path 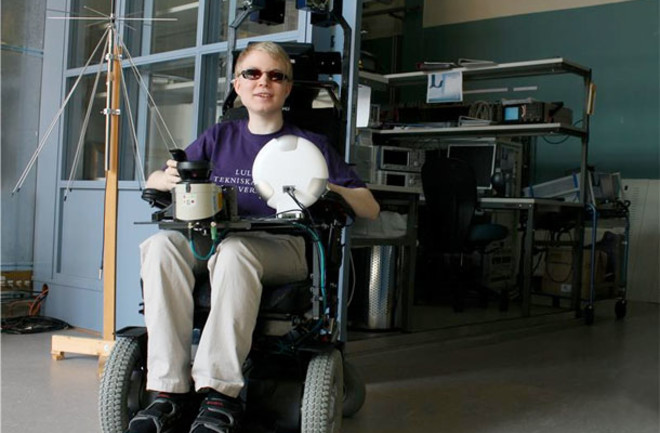 The story of a PhD student weaving his way through a busy university corridor doesn't usually make for breaking news. But then the average PhD student isn't wheelchair-bound, visually impaired, and testing a new laser-based wheelchair navigation system. In front of a crowd of onlookers earlier this month, a student performed the first public demonstration of a wheelchair that lets blind people "see" and avoid obstacles, afterward remarking that it was just "like using a white cane" (presumably underselling the technology to blunt the jealousy blooming in the onlookers). From the user's perspective, the new high-tech wheelchair is quite simple: You hold a joystick in one hand to drive the motorized chair, while the other hand engages a "haptic interface" that gives tactile feedback warning you about objects in your path, be they walls, fire hydrants, or those mobile collision-makers called people. Developed at Sweden's Luleå University of Technology (who brought us the autonomous wheelchair), this wheelchair uses lasers that make use of the time of flight technique, wherein "a laser pulse is sent out and a portion of the pulse is reflected from any surface encountered," and the distance between the wheelchair and the surface is measured based on the amount of time the laser takes to return. By sending out many laser pulses from different angles, the wheelchair creates a virtual 3D map of the surrounding area, which is then relayed to the user via the haptic interface. Right now, the laser only detects objects at specific heights, meaning that a blind wheelchair driver could be on the verge of tumbling over a cliff or crashing into an extremely short fire hydrant without any warning from the device; the team is trying to remedy this flaw by creating a 3D camera. In addition, a traditional setback with scanning technology involves vague measurements when the laser pulse glances off surfaces angled away from the laser. That's why sending laser pulses at different angles is useful, because "to remedy this it is often necessary to perform multiple scans from different vantage points and integrate the results." By sending off lasers at more than one angle, you diminish the likelihood of the laser merely glancing off objects. The Swedish team hopes to fix these problems and start producing the wheelchairs for consumers in five years. Wheelchairs aren't alone in the moving-vehicles-with-lasers category: Recently, BMW unveiled the Left Turn Assistant, which uses lasers to scan the road ahead and alert drivers as to whether they're about to turn into oncoming traffic. Related Content: 80beats: Special Laser Gives Real-Time View Inside Living Cells for the First Time 80beats: Peeping Tom Camera Uses Lasers to Peer Around Corners 80beats: NASA Satellites Use Lasers to Map the World’s Tallest Forests 80beats: Zapping Worm Brains With Lasers Reveals the Duty of Each Neuron