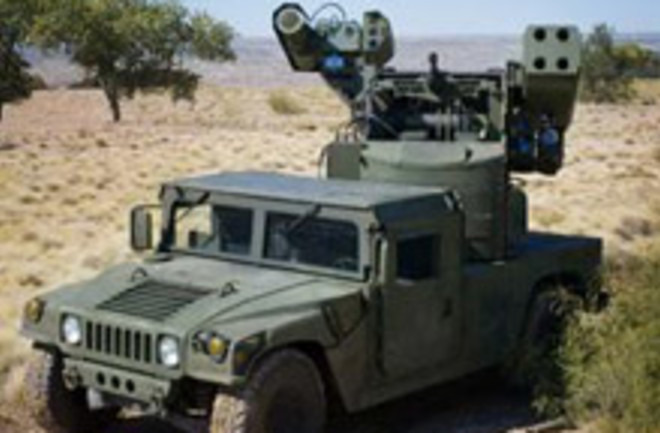 In a preview of possible high-tech battles to come, Boeing has announced the successful test of a laser weapon designed to shoot down unmanned aerial vehicles (UAVs). Robotic spy and combat planes are a hot field of military research because their use doesn’t endanger pilots, and because they can be smaller and harder to detect than conventional planes. But Boeing vice-president Gary Fitzmire argues that the military should be investing not just in UAVs, but also in devices that can destroy them. “Small UAVs armed with explosives or equipped with surveillance sensors are a growing threat on the battlefield,” he insists. “Laser Avenger, unlike a conventional weapon, can fire its laser beam without creating missile exhaust or gun flashes that would reveal its position. As a result, Laser Avenger can neutralize these UAV threats while keeping our troops safe” [The Register].

The weapon was tested at the White Sands Missile Range in New Mexico, where the Laser Avenger tracked three UAVs flying “against a complex background of mountains and desert”, shooting down one of the UAVs [Gizmodo]. The device got its sci-fi tinged name because it’s a modified version of the Army’s existing Avenger air defense system, which had two missile launchers mounted on a Humvee. To build the Laser Avenger, Boeing swapped its ray gun and a target tracker for one of those missile launchers.

Boeing believes that the laser system is a superior way to take down UAVs because surface to air missiles designed to target normal-sized aircraft struggle to lock onto small, light, UAVs sometimes made from plastics rather than metal…. Firing a laser multiple times would also be cheaper than firing many missiles, and could continue as long as power can be supplied [New Scientist]. At the test at White Sands, the Laser Avenger brought down the UAV when its high energy beam burned a hole in the drone, causing it to crash. However, Boeing hasn’t revealed how long it took for the laser to do its work, nor how far away the robotic plane was.

In a 2007 demonstration Boeing used an earlier laser weapon to destroy improvised explosive devices like those that have proved so deadly in Iraq. Those initial trials raised some eyebrows, because the Laser Avenger used only one kilowatt laser; 100 kilowatts is generally considered the minimum for weapons-grade. Since then, the power has been “doubled,” Boeing executive Lee Gutheinz says in a statement. And Boeing swears the weapon performs just fine, despite its relative weakness [Wired News]. Boeing also points to the Laser Avenger’s new ability to track moving targets as a major breakthrough.