Kickstart your way to an experiment on a satellite!

This is very cool: Discover Magazine is contributing to a project to help the public create and run an experiment that will actually get launched into space aboard a small cubesat satellite!

This is a real thing. A small group of aerospace experts is running a KickStarter campaign to fund this satellite. By contributing to the KickStarter you can do anything from simply supporting them to actually being able to build and run your own experiment on the satellite once it's up. Here's a video explaining the basics:

[You may need to refresh this page to get the video to load.]

[UPDATE: The project reached its goal on June 21, after only a few days! Wow. However, you can and should still fund it; if you do you can enter Discover Magazine's contest.]

Discover Magazine's involvement with this has been to issue the Discover Space Challenge: you can submit your own idea for an experiment, game, or application to run on the ArduSat. The most innovative one will win free Team Development Kit worth $1500, and it will fly with the ArduSat into space! Details are on the KickStarter page. 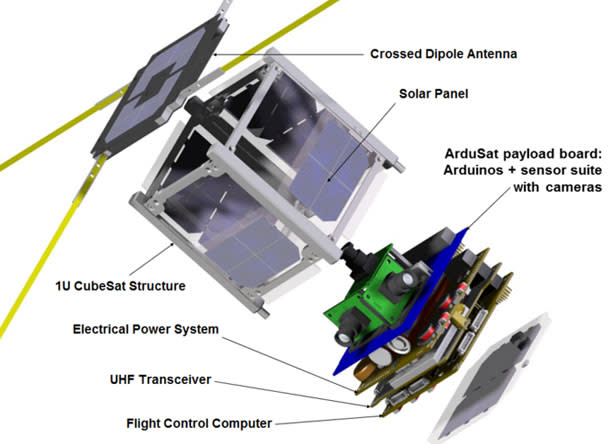 The satellite itself is very small: just 10 cm (4 inches) on a side, and weighs only about a kilogram. But it will pack as many as 25 sensors on board, including three detectors, a spectrometer, a magnetometer, and even a Geiger counter. Plus, of course, the experiment from whomever wins the Space Challenge.

The project as a whole is being run by NanoSatisfi, which is a company working on democratizing space access by allowing people to put experiments up there for cheap. Other partners in this endeavor are SciStarter (to promote it in the community), Science Cheerleader (run by my pal Darlene Cavalier), MySpectral (developing a sensor for the ArduSat), and DIYSandbox (working on the electronics).

There's a lot more info in the FAQ at the bottom of the KickStarter page. I'll admit I'm fairly amazed by all this. We live in a time when nearly anyone can design and fly an experiment in space. Incredible!

So think about what sort of experiment you'd like to see on a satellite... and submit it. You could actually and for real get it into space.