Just Based on DNA, Scientists Can Construct an Image of Your Face 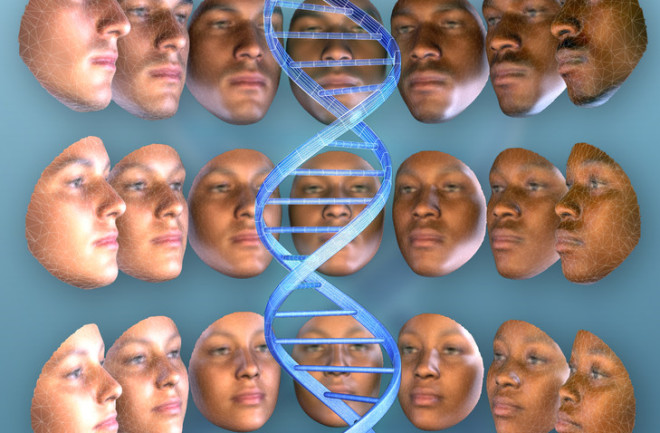 (Credit: Shriver Claes/Penn State) Putting pencil to paper has been the tried-and-true method to illustrate the faces of wanted criminals, but new technology is changing this traditional approach. DNA, rather than an artist's skill, is an emerging tool to recreate the face behind a crime. The new forensic technique is called DNA phenotyping. It relies on DNA, found for instance in a drop of blood, to create a simulated face based upon genetic markers. Although the science still has room to grow, start-up companies in the United States are already producing DNA-based sketches to assist police departments in criminal investigations.

One of the leaders in this growing field of research is Penn State University’s Mark Shriver. In a study published in PLOS Genetics, Shriver’s team detailed the process. First they compiled a list of known genetic mutations that cause facial and cranial deformations, because these genes, in their normal variations, could give us our distinctive looks. With these genes marked, researchers compared the genetic profiles of people with vastly different faces in order to highlight, through contrast, which genetic variations were at work. For example, the gene responsible for lip size would be expressed differently in someone with luscious lips than in someone with thin lips.

An example of the 7,000-point face map used by Shriver's team. (Shriver Claes/Penn State) Next, researchers scanned those same faces to build a 3-D facial map with over 7,000 coordinates. By combining genetic and facial map data, researchers could link DNA markers with certain facial attributes to build a predictive algorithm. The technique can predict genetic ancestry, freckles, facial shape as well as eye, hair and skin color. But it's clear that DNA phenotyping is in its infancy. In their papers, Shriver’s team said their genetic analysis explained only 23 percent of variations in faces. Shriver and his team continue to refine their technique, and they're homing in on other genetic variants that could help build more accurate faces.

An example of a DNA-generated face from Snapshot. (Credit: Parabon Nanolabs) When you run a person’s DNA data through Shriver’s algorithm, you get a rather generic face that isn’t too far from the mark, but there's still a lot of room for improvement. When writers from the New York Times recently tested the technique in their office, none of the roughly 50 employees that participated could correctly identify reporter John Markoff, and only 10 people identified video journalist Catherine Spangler. But something is better than nothing, especially in criminal investigations. In South Carolina, police in 2011 turned to Virginia-based Parabon Nanolabs for help in an unsolved double homicide. Parabon's commercial DNA phenotyping service, known as Snapshot, uses algorithms based loosely on Shirver’s. Scientists at Parabon constructed the first-ever publicly released DNA-generated mug shot, though unfortunately the killer wasn't ever caught. Parabon says it continues to work with other agencies nationally and internationally to provide leads for cold cases.

Legal experts warn that DNA profiling could erode civil liberties by butting up against the Fourth Amendment, which protects against unreasonable searches. As, explained in the New York Times:

Conventional DNA profiling, used for matching, does not rely on DNA linked to characteristics of the person, other than sex. Until now, that had helped blunt concerns that forensic use of DNA would violate the Fourth Amendment protection against unreasonable searches, said [Erin Murphy, a professor of law at New York University]. But the use of DNA to determine physical traits “completely dissolves that firm boundary,” she said.

No doubt, there’s still a long way to go for DNA phenotyping to become standard procedure in criminal investigations. However, criminals beware, investigators are finding novel ways to ensure justice is served.