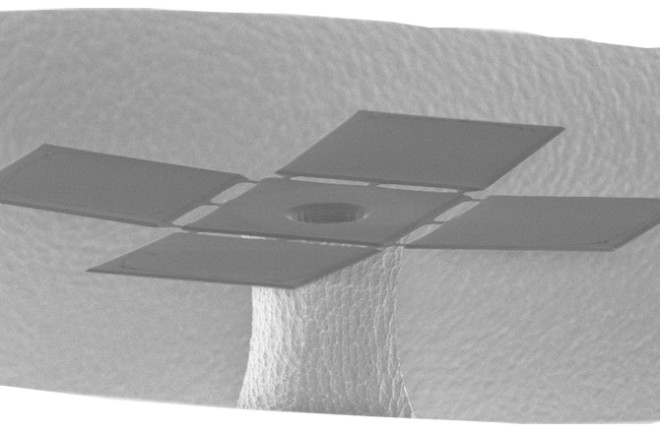 Researchers created microscopic cubes, pyramids, half soccer-ball-shaped bowls and long triangular Toblerone-like structures, all of which fold themselves when wetted by a drop of water. (Credit: A. Legrain, et. al, University of Twente)

Remember those elementary geometry lessons that involved cutting out a pattern from a worksheet and folding along the dotted lines to create a cube, cone or cylinder? Well, fully grown scientists are still doing the same thing, only on a microscopic scale. Researchers from the University of Twente in the Netherlands have created self-folding, microscopic structures out of silicon nitrate.

When the silicon is exposed to water, like magic, the flat cutouts fold into cubes, hexagonal bowls, pyramids and even Toblerone-shaped triangular tubes, all no bigger than a grain of sand. The research team’s shapes could someday be deployed in a variety of biomedical applications where stealth and accuracy are desired.

Knowing How to Fold’em

To coax a 2-D silicon cutout into 3-D, researchers rely on the cohesive properties of water molecules. A microscopic water droplet beneath the silicon causes the creases to pull together to create the geometric object. Researchers showed they could vary the amount of water in channels beneath the silicon to open and close the shape up to 60 times without showing signs of wear.

Although this team wasn't the first to demonstrate hydro-folding silicon, they were the first to develop a replicable, controllable technique to deliver the water. Up to now, scientists added droplets of water by hand, and their shapes could only be folded once. They described their water-based folding system in the Journal of Applied Physics.

Shaping Up, and Shipping Out

Researchers believe the new folding system will make assembling tiny shapes cheaper and thus more practical. They believe these microscopic structures could be used to deliver medication in a targeted fashion, or to perform micro-biopsies.

Check out the video below to see how water and silicon come together to work their magic.