Jumbo Robotic Ants Could Be Factory Workers of the Future 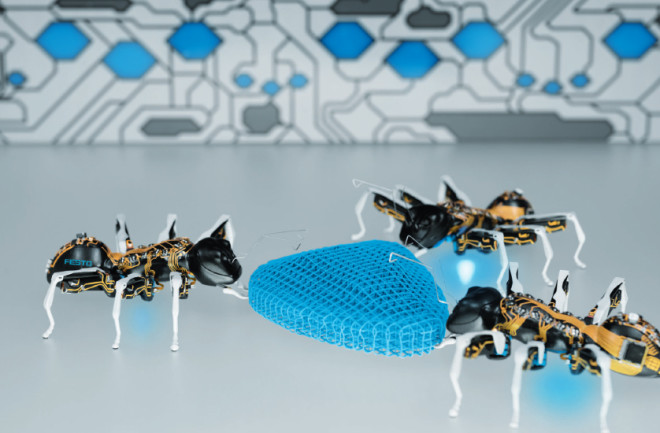 BionicANTS work as a team to move an object. (Courtesy: Festo) There may come a day when new worker orientations include not just meeting your human coworkers, but also the bionic robots that will help you on the job. The German robotics company Festo is giving us a glimpse of that future with its networked colony of robotic ants. The bots, about the size of a human hand, are being developed as mini mechanical workers. The company plans to showcase their new creation this month at the world’s largest industrial technology fair, Hanover Messe.

A single ant isn’t really a force to be reckoned with, but when thousands of these creatures work together, they can pick a carcass clean in minutes or construct massive colonies. Festo’s BionicANT not only replicates ants’ anatomy, but also their ability to work as a colony to accomplish a task. The BionicANTS all work together under clear-cut rules that delineate a task that needs to be accomplished. Each ant makes its decisions autonomously, but in communication with the other ants via a radio module. In other words, there is no "ant hierarchy" and each ant pitches in in the best way possible given a particular scenario. So, for example, consider the task of moving a heavy object from one side of the room to the other. If that object is too heavy for one ant, it can message its co-workers to come lend a hand. Then, as a team, they coordinate their movements so three ants carry the object instead of one. Complex algorithms help the bots determine how to individually contribute. You can see how they work together below:

A Lot of Tech Packed Into a Small Package

To sense its whereabouts each ant is fitted with a 3-D stereo camera and an optical mouse sensor. To refuel its batteries, the ant simply presses its antennae against a charging dock. Engineers 3-D-printed their ants’ bodies and circuitry, which is the first time these two printing techniques were combined. The ant’s ceramic legs and pincers utilize piezo-electric technology for their movements. Piezo-electric components use a slight electric charge to, for example, bend a metal plate. The bending of the plate causes the legs to take a step, or the pincers to close on an object.

A schematic of the BionicANT. Courtesy: Festo Festo engineers say the future of manufacturing will involve producing more customized products rather than churning out the same widget on an assembly line. BionicANTS, with their adaptive and collective programmed behavior, can accomplish myriad tasks on the fly, and could help manufacturers adapt to a more dynamic business environment. It’s too early to say where Festo’s BionicANTS will fit in on the factory floor, or what other tasks they’d be able to perform. They aren’t even for sale. However, the technology driving the ants’ collective, autonomous behavior may very well pave the way for more intelligent industrial robots to come.