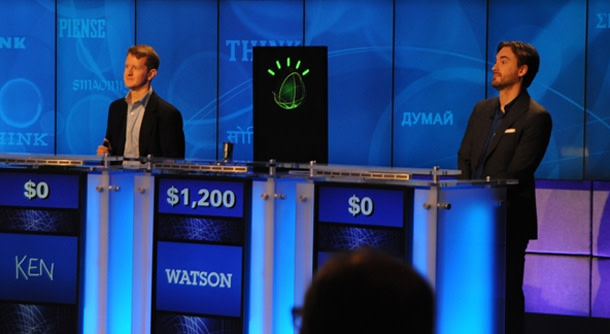 Perhaps even a supercomputer needs a little time to get loosened during a big performance. After an admirable but not perfect round of Jeopardy on Monday in which it finished tied for the lead, IBM's Watson computer crushed human champions Ken Jennings and Brad Rutter on Tuesday's episode and takes a huge lead into the final episode tonight. Last night's play began with Watson and Rutter at $5,000 apiece, with Jennings trailing at $2,000. After Watson's dominance, last night's show ended with the machine having tallied $35,734 to $10,400 for Rutter and $4,800 for Jennings.

Watson elegantly saw off the puny humans with responses on the likes of Franz Liszt, dengue fever, violin, Rachmaninoff and albinism. Even host Alex Trebek seemed spent: with Watson wanting to wage the extremely specific amount of $6,435 on a Daily Double, the laconic Trebek simply replied, "I won't ask" (naturally, Watson was spot on here too). [TIME]

Though Watson steamrolled the best competition humanity could provide, its foibles are as telling as its dominance—especially when the seemingly unstoppable machine makes mistakes that would be laughable from a human contestant.

Watson's one notable error came right at the end, when it was asked to name the city that features two airports with names relating to World War II. Jennings and Rutter bet almost all their money on Chicago, which was the correct answer. Watson went for Toronto. Even so, the error showed another side to Watson's intelligence: knowing that it was unsure about the answer, the machine wagered less than $1000 on its answer. [New Scientist]

, project leader David Ferrucci explains why he thinks Watson was so wrong on the airport question—for one thing, he says, the computer doesn't give category titles too much weight because they can be tricky on Jeopardy. Still, Watson survived that gaffe, and it showed that it knows how to hazard a guess if it must (even if the answer lies below its "confidence level" to buzz in on a normal clue). Watson did so successfully when it snagged the Daily Double earlier in the round:

Watson was 32 percent certain of the correct answer, but that was well below its buzz threshold for that clue. So faced with the prospect of losing money if it didn't answer (only the contestant who picks the Daily Double clue may answer), the computer went with its best guess and it was correct. The Jeopardy clue Watson guessed on was, "The ‘Ancient Lion of Nimrud' went missing from this city's national museum in 2003 (along with a lot of other stuff)." The answer was "What is Baghdad? [PC World]

As for Jennings and Rutter, they can only hope Watson is confused plenty more times during tonight's final broadcast, giving them a chance to climb out of a deep hole. Admittedly, though, with Watson's speed on the buzzer and deep reservoir of knowledge, it's the clear favorite to complete the rout. And if you're feeling down about humanity's beat down, check out our feature on other games computers play

—including ones where Homo sapiens still dominates. Related Content: DISCOVER: Who's Smarter, A Human Or a Computer? Round 9: Jeopardy