Describing ideas so subtle they are literally beyond words. 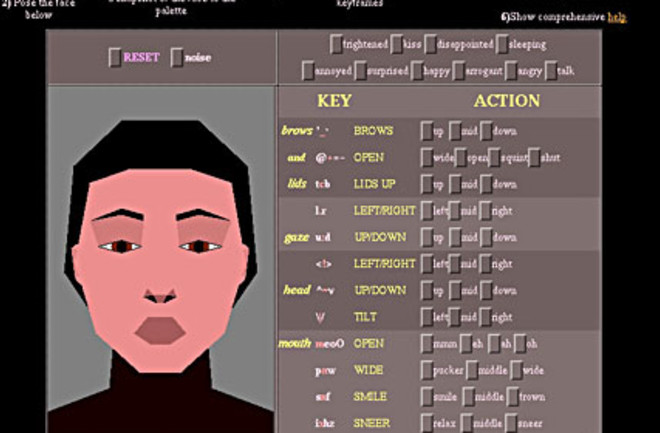 Was I serious when I suggested that people might someday become more like cephalopods? At the time I was thinking about the way some cephalopods, such as the mimic octopus, can appear to morph into different objects. I wondered whether people using computers could someday pull off the same trick (within virtual reality, presumably) and how that ability might expand the range of human expression. My guess is that being able to turn into whatever comes into your mind — or, more profoundly, to simulate a concept or way of being instead of just talking about it — will lead to a new kind of expression, which I call postsymbolic communication.

This may sound wildly speculative, but yes, I really was serious. In fact, I believe we are seeing early signs of the cephalopodization of our species right now. One arena in which the transformation is beginning is in massive online virtual worlds. Second Life is probably the best example. I serve as a technical advisor to Linden Lab, the company that administers Second Life, but really, most of what I have done is watch in delight and amazement as thousands of creative individuals have signed up, logged in, and built an entire virtual planet.

In this new world, people can create fanciful avatars — digital representations of themselves — as well as buildings, artwork, clothing, and assorted other objects and services. These virtual elements can also be bought and sold. Second Life is the most authentic example yet of an Internet-based business. Compare it to Google: The ads on Google are often for things to buy in the physical world, like cars, flowers, or real estate. Why? Because more and more of the things you might get or do exclusively on the Internet are already available for free to entice you to visit sites where you will connect with those ads! But when people buy and sell a virtual house, jacket, or whatever in Second Life, it is truly money being spent on bits of information within the Internet, with no reference to events in the physical world.

As much as I am enjoying the unfolding of Second Life, I can see that it has limitations. The powers of invention that users can bring to bear in the virtual world are channeled through menus and sliding controls built into the program's user interface, so the differences between various avatars or buildings or other things are only skin deep. Don't get me wrong: Being able to change skin is a huge thing, and in fairness, that is most of what cephalopods can do, at least as they've evolved so far. (Give the cephalopods time, though — maybe a few hundred million years — and they might eventually evolve ways to use their morphing as the basis for intelligence and a civilization, just as humans did with spoken language.)

Obviously, a small set of menus and sliders cannot represent all the things that people can communicate to one another. Great writers change language itself in the process of writing. English was never the same after Shakespeare. The same can be said about music in the wakes of musicians like Igor Stravinsky or Louis Armstrong. Those people invented new menus and dials. In a similar way, we reinvent ourselves every day as we communicate with friends or lovers.

If our ability to invent new bodies and worlds could become a form of expression as deep as language or music, then it ought to be possible for morphing people to convey ideas and feelings just as deeply as great writers or musicians do (or, for that matter, as great lovers or great parents do). I believe that is actually happening already, if only in a limited way and on a modest scale. A small number of people, mostly mathematicians or scientists, have developed the skills to create deep simulations — meaning those that can change the underlying thinking that motivated the simulation in the first place — with enough ease and speed to give a precocious peek at some of the wonderful qualities human communication might encompass in the future.

One of these visitors from the future is Ken Perlin, a computer scientist at New York University who is probably best known for coming up with Perlin Noise, a mathematical technique that allows computer graphics to portray forms like fire or gritty, realistic textures. When computer graphics was brand new, the images tended to look polished and shiny. Ken helped broaden the range of what could be imaged and won an Academy Award for his contribution.

Ken is a frequent houseguest of ours and always shows up at our door in a frenzy because he wants to get through the hellos as quickly as possible so he can finish his latest applet (a small software application). I usually have no patience with a nerdy approach to life that retreats into the computer, but it would be a mistake to understand Ken in that way. In addition to English, one of Ken's native tongues is the Java programming language. He is always conjuring up tiny worlds in his head in the same way a comedian is always working on new jokes in the back of his mind. Ken's Java applets often don't emphasize the external polish of the virtual objects created inside Second Life, but in compensation they have a lot of depth (some of Ken's creations appear on these pages).

One day not long ago, Ken emerged from an intense early morning coding session on our couch with a troop of dancing avatars on his laptop. These little virtual creatures were ostensibly part of a technical presentation on ways to represent human motion, but it was clear that they held another level of meaning. Ken had programmed these figures so that they captured a small truth about human relationships, in much the same way that someone else might express a fleeting insight in a poem or a short story. Ken's figures moved differently based on their proximities and relationships to one another. That feedback resulted in motion that was more realistic than what I'd seen before in artificial characters, showing that animators had not been thinking enough about how social connections are expressed through motion.

Another visitor from our cephalopod-like future is the wonderful British physicist Sir Michael Berry, whom I recently met when we both attended sci foo, an experimental "wikified" science conference at the Google campus. Michael uses the program Mathematica in ways that remind me of what Ken does with Java. He is fascinated by fields of light, so he creates model light fields in the computer and plays with them.

Of course I must point you to Ken's and Michael's Web sites. Unfortunately, I don't think the eloquence of what they do is fully portrayed online. There are plenty of wonderful math toys and visualizations on the Internet, and if all you see of Ken's and Michael's creations is what's on their Web pages, you might consider them to be in a similar class with many others. But there is much more to the story.

These guys use their simulations conversationally. Michael, for instance, reveals his Mathematica creations the way a great saxophonist takes a solo — openheartedly, full of anticipation that it will reach deeply into another person's experience. He precedes the unveiling of each image with stories, asides, jokes. All the visitors from the future I've met so far share this quality: They are performance artists who work best on an intimate scale.

The code they create is useful and wonderful all on its own, but the full eloquence of the communication happens in the way the code is revealed, and currently that compound expression is a treasure that is not readily captured and re-created online. It would be nice if there were at least videos of the way these guys reveal their simulations, but even that probably wouldn't be enough. There's an interactive element, a connection with the other people in the room.

It might sound elitist to proclaim topflight mathematical minds as harbingers of the future of culture, but it has happened before. In retrospect we understand the brilliant inventor Nikola Tesla as both a technical and a cultural harbinger. The mad scientist with electricity swirling around him, holding onlookers in awe: Tesla started that shtick; Jimi Hendrix perfected it. Today kids outfit their rooms with video-game gear and electric guitars and broadcast themselves over the Net — a new vernacular is born.

My guess is that the kind of expression we are seeing from today's Perlins and Berrys will spread until it becomes a part of art, and then, eventually, everyday life; and everyday life will be richer for it. What was considered a rarefied technical skill in one era can eventually become so common that people take it for granted. Computer skills are becoming ubiquitous, for instance. The level of technical competence needed to remix a piece of music today would have been considered extraordinary 20 years ago, and yet masses of people are able to do it.

But what about that interactive element? Will the kind of cephalopod expression I'm hoping for be able to take place over the Internet, or will it remain an in-person activity, realized only among huddles of friends peering at a laptop? The answer to that question will be determined largely by whether research in tele-immersion succeeds or fails.

Yes, I know the type of communication I'm talking about here is hard to imagine in full, but try to picture a family, perhaps in the late 21st century, visiting a virtual world like Second Life but much more vivid and immersible, and improvising models of themselves, modulated by spontaneously invented behavior programs, thereby deepening and transforming family bonds. On good nights, in my dreams, I can see a little of what this would be like.