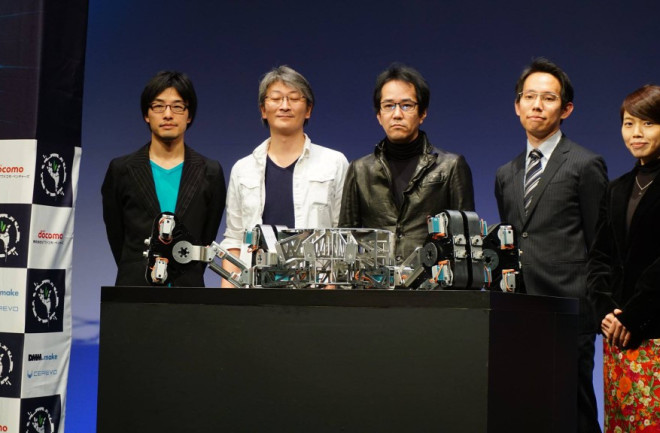 A robot prototype inspired by the Japanese anime film "Ghost in the Shell." Credit: Ghost in the Shell Realize Project A Japanese anime film that strongly influenced Hollywood films such as "The Matrix" has more recently inspired a real-life research effort dedicated to creating futuristic technologies. The "Ghost in the Shell" anime imagined a special law enforcement unit that employs cyborgs, robots and hackers to fight cyber criminals in 2029. That science fiction setting remains more than a decade away, but Japan's Ghost in the Shell Realize Project has begun unveiling research initiatives based on the film's vision of giant spider-like robots and "cyber protection suits" with some form of artificial strength for humans. The Ghost in the Shell in the Shell Realize Project officially began in 2014, according to a roundup of Japanese news sources by Kotaku. This year, the project held a small competition and award ceremony that highlighted ideas such as the cyber protection suit. It also announced two new initiatives aimed at recreating the anime's iconic Tachikomas, giant spider-like robots that can either walk or roll on wheels attached to their legs. One initiative by the company Cerevo aims to create smartphone-controlled toy robots that can walk on four legs or roll for sale toward the end of 2017, according to the website Crunchyroll. The other initiative by Amauchi Industry and Karakuri Products aims to build a much larger industrial robot version of the Tachikomas by the end of March 2018. https://www.youtube.com/watch?v=fYZDESqv0ic The Ghost in the Shell Realize Project is not the first to mine the realm of science fiction for real-world technologies. The U.S. military has launched a number of research projects inspired by the technologies of science fiction stories such as the "Star Wars" films. An informal survey by the scientific search engine startup Sparrho also showed how often references to science fiction films appear in research papers: a possible indication of science fiction's influence. Some of the research efforts focused on science fiction ideas can seem a bit fantastical. But Japan's longstanding strength and interest in robotics research may benefit the Ghost in the Shell Realize Project. Japanese companies such as Toyota, Honda and Nissan held eight out of the top ten patent applications in robotics, according to the World Intellectual Property Report 2015. Japan also has a decidedly more open view than the West toward robots and the possible merging of humans and machines as cyborgs. The cultural influence of Buddhism and Shinto has shaped Japan's secular culture to the point where it's not necessarily controversial to view a robot as something on the level of a living being. In 2015, a Buddhist temple in Japan held a funeral service for broken AIBO robot dogs donated by their owners. Such cultural attitudes can also be seen in both the original "Ghost in the Shell" film and its spinoff TV shows and films. A planned Hollywood live-action adaptation starring Scarlett Johansson is currently scheduled for 2017. Whether or not that new cinematic production remains faithful to the original, Japan seems determined to turn at least part of the "Ghost in the Shell" science fiction into reality.