Between its thermal properties and low environmental impact, this ancient building material has modern potential. 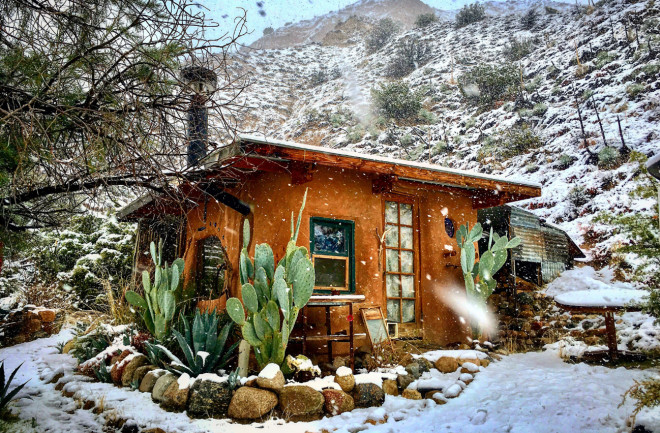 Baking in the warmth of California’s Cumaya Valley stand three small structures made of an ancient building material: cob. The material is a mixture of clay-heavy soil, straw, sand and water that — when dry — provides a simple but effective shelter.

The three structures are more akin to rooms than homes (clocking in at around 100 square feet each), but they come with an appealing price tag: only around $500 each, not including labor cost. Quail Springs Permaculture, an educational non-profit based in Southern California, built the houses over the span of a few months.

According to natural building and advocacy director Sasha Rabin, the structures were made using — along with reclaimed fixtures such as doors and window frames — materials sourced directly from or nearby the construction area. This has historically been the case for cob and other vernacular materials, which make use of local resources.

“We are interested in building systems where people can build shelter for themselves and their families, much like people used to not that many generations ago,” Rabin says.

Cob structures can be found around the globe. Some wizened cob buildings, dating back centuries, can be found in the United Kingdom’s Devon County, for instance. Though the technology is old-school compared to modern building techniques that require power tools, cement and costly lumber, there’s a growing interest in the material for its environmental benefits and ease of use.

A Pair of Boots and an Umbrella

Cob is just one part of a broader practice called earthen building, says Linda Watson, associate lecturer at the University of Plymouth. Because the practice uses vernacular materials, it is often adapted depending on needs and whatever materials are nearby. Adobe, commonly found in the American Southwest, for example, is dried into blocks prior to construction; Cob is molded into walls while still wet.

“There are lots of techniques that have been developed,” Watson says. “They're similar, but not the same, to suit the local soil types and climates.”

Earthen building techniques are also surprisingly versatile. The structures can be set up with modern amenities like power and internet, and they can reach more than 10 stories tall — Shibam Hadramawt in Yemen, for instance, has mud brick skyscrapers. “You can build quite high,” Watson says.

According to Lola Ben-Alon, assistant professor at Columbia University’s Graduate School of Architecture, Planning and Preservation, the structural strength of cob comes from a few sources. Fibrous plant material lends tensile strength, sand provides compressive strength and clay-rich soil binds it all together.

While cob can hold up to water, it functions best when dry. As such, cob houses are often raised and given a large overhang to protect them from getting wet. “There's a famous saying,” Ben-Alon says. “A cob house needs a good pair of boots and a nice umbrella.”

Half a Century of Energy Savings

Currently, the construction sector accounts for 38 percent of all energy-based carbon dioxide emissions, according to the United Nations. Around two years ago, Ben-Alon performed a Life Cycle Assessment on cob as a building material, comparing it to standard-issue concrete masonry and wood frame walls. She and her colleagues ran the details of cob’s constituent parts through a program called SimaPro and determined the energy input and greenhouse gas output of cob versus the modern building materials.

The assessment considered a myriad of factors, including the energy that goes into sowing the seeds for straw and the emissions produced by machines used to harvest each material. Moreover, it looked at the energy cost of heating, cooling and maintaining a structure made of each material over a period of 50 years in six different climate conditions.

The researchers found that during the construction phase, cob required 75 percent less energy than more conventional wall systems. When it came to maintenance, heating and cooling, cob did require more energy than traditional building materials in some cases. However, after factoring in the benefits from the construction phase, the earthen material still outperformed its competition over the entire 50-year time span.

According to Rabin, cob performs best in regions that are hot and dry — and it isn’t useful around the world. The earthen building material is a poor insulator but has a strong ability to store heat. That makes it a poor choice for, say, Alaska, but a great one for California, where the material can soak up heat during the day and release it during the region’s cold nights. “It equalizes these quite large temperature swings,” Rabin says.

There are, however, some negative perceptions about cob — fueled in part by a general lack of knowledge. “People in mainstream construction see cob as dirty, low-tech, poor in its performance, poor in its materials,” Ben-Alon says. “Or it's a hippie's building style, or you can only build [with] it if you're high-income because it will cost so much for labor.”

Another factor, Rabin says, is that building a cob house can be tricky on an administrative level. Although not illegal anywhere, a person looking to use cob in the U.S. must get a permit, which can be difficult given the general lack of knowledge surrounding the material.

To combat these administrative roadblocks, Rabin travelled to a Texas laboratory in May to perform a fire test on a cob wall (the wall is still drying, so the test has yet to be performed). Similarly, Quail Springs collaborated with engineering students from California Polytechnic State University, San Luis Obispo to perform earthquake testing on cob walls.

And last year, a cob code was approved for inclusion in the International Residential Code. While the IRC is a model building code with no legal standing of its own, it is used in most of the U.S. as the basis for building codes. Submitted by the Cob Research Institute — an organization with which both Rabin and Ben-Alon are affiliated — the adoption should make building cob structures easier in the future.