It’s Time For My Bath! British Keyboards Beg to be Cleaned 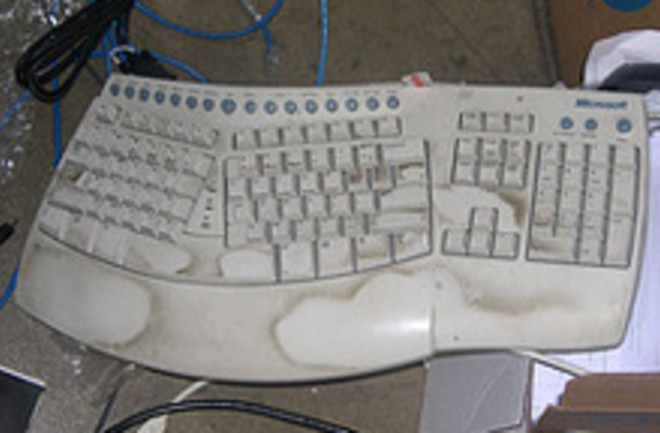 Last month, British microbiologist Peter Wilson released his revolting finding that a person's keyboard could harbor five times as many bacteria as a toilet seat. That's a recipe for sickness in any office, but it could be downright deadly in a hospital, with doctors and nurses passing germs as they type data into the computer. So Wilson is trying to change that, along with other researchers at University College London Hospital and American company Advanced Power Components. Specifically, they have designed a keyboard for the U.K.'s hospitals that notifies you when it's dirty. Two main factors contribute to keyboard filth: cleaning them is difficult, and people rarely remember to do it. Wilson and his team tackled both problems. First, it's hard to get into a traditional keyboard's dirty and germ-filled crevices, so the new design is flat, allowing it to be wiped down in a flash. And while you might only clean your keyboard when a story like this reminds you what a bacteria trap it can be, Wilson's team programmed their keyboard to nag—a warning light comes on after a few hours, reminding the cleaning staff to disinfect it. British hospitals everywhere will soon be trying out the flat keyboard, and those old tough-to-clean models couldn't be gone soon enough. While normal British offices could have 150 times the recommended limit of bacteria on their keyboards, Wilson says, hospitals are worse: Doctors and nurses are cognizant that they need to wash their hands between patients, but they aren't so diligent in cleaning up between working with a patient and typing on a computer. But, he says, using the new keyboards and cleaning them every 12 hours can cut the bacterial load by 70 percent. If you're stuck with an old-style keyboard, though, don't despair—there are always Q-tips and alcohol. Or, if you don't have time for such a meticulous process, you could just throw your keyboard in the dishwasher. We are not advocating this, however, so do so at your own risk.