It's an Eating Machine, and that's a Compliment

Stuart Wilkinson is probably the only person on Earth who has to stop and think, "Oops— time to feed the robot." He's the creator of Chew Chew, a 3-foot-long trainlike machine that runs on food. A plastic "stomach" contains E. coli bacteria that metabolize sugar, releasing electrons as they break it down. A chemical derived from the henna plant scoops up the electrons and carries them to one side of a fuel cell. They are then drawn even more strongly to oxygen atoms on the opposite side, so the electrons flow across the cell, creating a current. Wilkinson, a roboticist at the University of South Florida in Tampa, added an esophagus to vent carbon dioxide and to prevent the robot from ingesting air with its food; even a little bit of oxygen would disrupt the chemistry and block the flow of electrons. This restriction keeps Chew Chew a vegetarian, Wilkinson says, because without oxygen bacteria cannot digest the fats found in meat.

Right now, a meal of three sugar cubes takes 18 hours to digest but provides Chew Chew with only 15 minutes of power. Wilkinson is optimistic that drastically improved "gastrobots" will someday be able to monitor a farmer's orchards or vineyards, feeding on plants as they go. "One idea is to release a swarm of gastrobots that are targeted to a particular pest plant, like kudzu. You let them out and they consume just that species to keep themselves going," Wilkinson says. 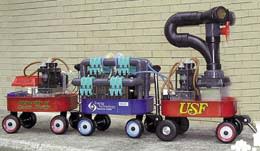