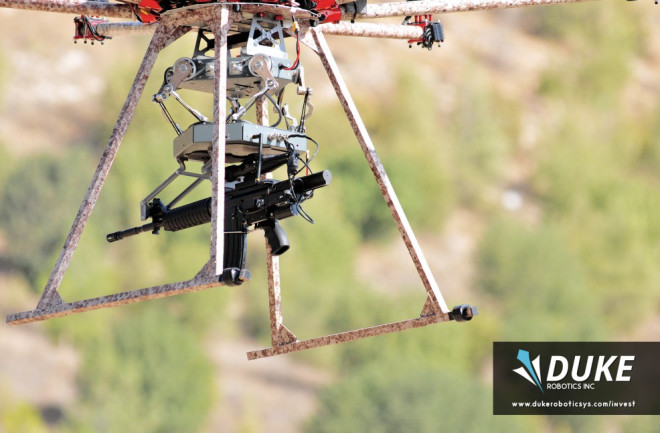 In 2015, Israeli Special Forces likely made history by using a sniper rifle mounted on a commercial drone to take out a target. The robotic solution that achieved such pinpoint accuracy came from Duke Robotics, a startup founded by veterans of the Israel Defense Forces. That startup has since developed a multi-rotor sniper drone capable of accurately firing a wide array of weapons such as military assault rifles and grenade launchers.

This is not like the usual military drones flying above modern battlefields. Predator and Reaper drones operated by the U.S. military and its allies resemble large unmanned aircraft that provide air support by firing Hellfire missiles or other weapons with a fairly large damage or blast radius—a factor that can raise the risk of accidentally wounding or killing nearby civilians. Smaller military drones such as hand-thrown Ravens tend to be unarmed robotic scouts. By comparison, Duke Robotics' sniper drone, called TIKAD, is designed to precisely target individual enemies in crowded city environments. It's also meant to handle dangerous situations that might ordinarily require human soldiers to clear a sniper or nest of insurgents from a building.

"The idea is to create something that enables you to send in a sniper rifle on a drone and eliminate a target with pinpoint accuracy," says Raziel “Razi” Atuar, co-founder and CEO of Duke Robotics. "And then you save lives on both sides."

Flying Drones Instead of Boots on the Ground

Much of the startup's vision for modern warfare comes from its motto: "No boots on the ground." The idea of sending armed drones in the place of human soldiers stems from the startup founders' own military backgrounds. For example, Atuar served as (Lt. Col.) battalion commander in the Israeli Special Mission units and remains a reservist. He pointed to difficult urban combat situations from experiences such as Israel's Operation Protection Edge in 2014, an Israeli military offensive into the Palestinian Gaza Strip aimed at suppressing militants who were firing rockets and mortars into Israel.

The Israeli offensive included heavy urban combat, artillery fire and airstrikes that damaged or destroyed 17,200 homes in the Gaza Strip, according to United Nations figures. Between July 8 and August 27, the Israeli military lost 66 soldiers during the operation and six civilians (plus a Thai national) killed by mortar and rocket firing coming from the Gaza Strip. On the other side, Palestinian losses were significantly higher. UN statistics put the number of Palestinian deaths in the Gaza Strip at 2,100, including 1,462 civilians.

As it stands, military commanders often face difficult choices between risking civilian deaths or injuries by calling down an artillery or airstrike on an enemy-occupied building, or risking the lives of their own troops by sending them in to clear out the building room by room. The U.S. military has experienced similar challenges with urban combat during operations in Afghanistan and Iraq.

Duke Robotics sees the chance to replace that blunt destructive power of artillery and airstrikes with the targeted fire of its TIKAD drone. An armed sniper drone capable of taking out a single enemy without collateral damage could prove invaluable in situations where enemies have occupied a building that may also contain civilian families. By comparison, other small military drones in the same weight class as TIKAD tend to be unarmed and can only serve to spot potential enemies.

Much has changed since Duke Robotics first put a sniper rifle on an off-the-shelf drone in 2015. That improvised drone sniper was limited to a flight time of just five minutes because its battery was unable bear the heavy weight of the sniper rifle for very long. So Duke Robotics got to work designing TIKAD as a multi-rotor drone that can carry an array of different weapons with the help of a 10-pound robotic gimbal.

The TIKAD drone was developed by Israeli military veterans who wanted a flying sniper drone that could support troops on the ground. Credit: Duke Robotics

The greatest challenge involved creating a drone that could still handle the recoil from each time it fires a designated marksman rifle or grenade launcher. For example, a U.S. teen demonstrated the firing of a handgun mounted on a quadcopter drone in a 2015 video, but the drone got physically pushed back each time it fired the handgun.

Duke Robotics solved that recoil problem by developing a real-time robotic gimbal with six degrees of freedom that can absorb the shockwave of each gunshot and can stabilize the weapon regardless of environmental conditions or the drone platform it's mounted on. That robotic gimbal can also handle weapons three times heavier than itself. "What has never been done before is to mount a weapon, any weapon, on a multi-rotor drone because of the recoil, accuracy and the system you have to deal with it," Atuar says.

The usefulness of any drone still depends in large part upon how long it can stay airborne—or how long a distance it can fly—before it needs to get its battery recharged or otherwise get refueled. Duke Robotics lists "confidential" on a FAQ sheet listing the TIKAD drone's flight endurance specifications. But Atuar was willing to say that Duke Robotics can fly for "operational mission times."

Whatever the actual endurance capabilities, they apparently have proven promising enough so that the Israel Ministry of Defense has placed some initial orders with Duke Robotics. In 2016, the TIKAD drone won the top prize at a Combating Terrorism Technology Conference sponsored in part by the United States Defense Department’s Combating Terrorism Technical Support Office. More recently, the startup has launched an equity crowdfunding effort aimed at selling up to $15 million in common stock under the SEC's Title IV Regulation A+ (meaning you don't need to be an accredited investor to purchase shares).

A Sniper Drone Under Human Control

The TIKAD drone is remotely operated by a human soldier somewhere on the ground. That means there's nothing to worry about for now in terms of a battlefield Terminator that kills outside of human control. "The human operator is the only one that decides whether to engage or not," Atuar says.

No country has yet deployed a fully autonomous drone or robot as a military weapon, even if some battlefield systems technically may already have that capability. An autonomous military drone would have certain advantages in being able to carry out certain duties or entire missions on its own without a human operator babysitting it the entire time. But the U.S. military and others still seem wary of giving drones and robots the authority to choose when and where to use lethal force. (Proposed bans on autonomous killer robots seem unlikely to gain much traction despite gaining some attention from the United Nations.)

In the bigger picture, the gunslinging TIKAD drone represents the latest in a long line of armed military drones remotely controlled by humans. Since World War II, some military "suicide drones" have blurred the lines between drones and missiles by diving onto targets and exploding. More modern versions of such suicide drones can slowly circle over battlefields before finding a target and diving in for the kill. Whatever their method, modern armed drones have already proven lethal weapons. U.S. military drone strikes alone have killed thousands of people, including disputed numbers of militants and civilians, since 2001.

Insurgents and terrorists have also been turning off-the-shelf commercial or consumer drones into weapons of war. During battles in Iraq and Syria, Islamic State has used weaponized drones to act as small aerial bombers that drop grenades and other small explosives on troops and vehicles. Other weaponized drones have acted as Trojan horses that have exploded and killed people examining them on the ground.

Still, the existence of the TIKAD drone suggests something new. Rather than evoking the killer robots of our science fiction nightmares, it's more about giving human sharpshooters a flying robotic sniper rifle that can be controlled remotely from afar. Such technology will not entirely replace the need for boots on the ground, as suggested by its aspirational "future soldier" nickname given by Duke Robotics. But it's a step in that direction as battlefield drones and robots become both smarter and more capable.