After the Arab Spring: A chilling reminder that social media can foster political oppression. 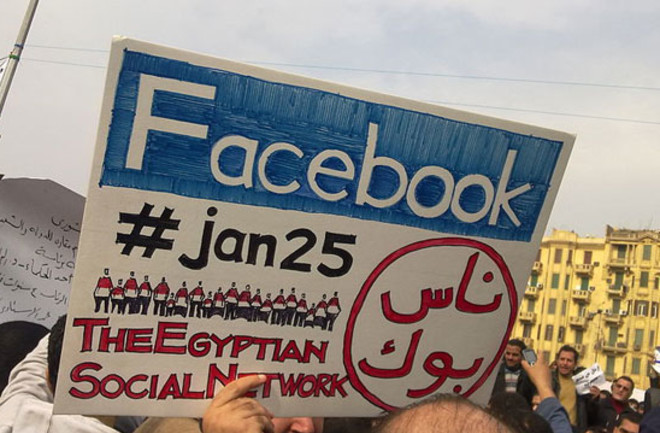 Beneath the arched, soaring, pale yellow ceiling of a room in the maze of Al Azhar University, past the wall of black-and-white portraits of imams dating to the 12th century, Heba Zakaria, age 32, sits across from a blackboard scrawled with the email address topmedia4u@gmail.com. (English is still the lingua franca of the Internet.) Zakaria is a member of the ascendant ruling party in Egypt, the Muslim Brotherhood’s Freedom and Justice Party. She is one of the new generation of postrevolutionary, politically active, religious Egyptians using social media, cell phones, and other ostensibly liberating technologies—tools that just may end up tamping down intellectual freedom and women’s rights. When I asked to meet with members of the Muslim Brotherhood’s new media outreach team, their spokesman sent me to her.

With the world watching, Egyptians revolted against the repressive regime of Hosni Mubarak in January 2011. During 18 heady days in Tahrir Square, liberals and theocrats joined hands and the Egyptian people seemed unified. When the first postrevolution elections arrived, however, just one voice dominated: The Muslim Brotherhood and other hard-Islamist parties gained control of 71 percent of the parliamentary seats in what international observers ruled a fair election. The Brotherhood candidate, Mohamed Morsi, subsequently took the presidency as well.

It remains unclear how much power the military will actually cede to Egypt’s new civilian authorities. But secular liberals—who didn’t even make it to the presidential runoff and who are a distinct minority in the Parliament—fear that the Islamist-dominated government will put God above human rights. Technology was not a leveling force in Egypt’s tattered polit­ical world. It gave an edge to the Islamists, because they had a political ground game going back decades and, some say, because they were financed to the tune of hundreds of millions of dollars by the conservative Persian Gulf states. Now these same parties have established a social media presence and are using the Internet to extend their reach.

“We used new media before the revolution to spread the message and people made fun of us,” Zakaria says. It is a warm January day on the eve of the revolution’s first anniversary, and she is dressed in a floor-length maroon leather coat, her face framed by a tightly wrapped dark maroon scarf resting on a short plastic bill. In postrevolutionary Egypt her ensemble, meant to express female modesty, is never out of place anywhere, even at the height of desert summer.

Zakaria runs Al Azhar’s newspaper and also donates her time and knowledge to the Freedom and Justice Party’s new media work. The Internet, she says, had a liberating effect by bringing together like-minded religious Egyptians. “The Islamic people didn’t have a voice, and new media gave them a voice,” she tells me. The web coalesced “a million people who have the same thoughts and ideas.” Once the Muslim Brotherhood implements those ideas, laws already on the books limiting women to second-class status and curtailing freedom of speech in the guise of fighting “blasphemy” could be increasingly enforced.

Zakaria predicts that the Brotherhood’s new-old legal framework and family values platform will help women realize they prefer domestic life and reject work outside the home. “The old media spread discord and put a message in the woman’s head that she is set against the man, and that influences her behavior in the household. The woman is a wife and mother first, and the dad is the husband and father,” she says. When I note that Zakaria herself works outside the home and is unmarried, she ruefully explains that it isn’t her choice. “Deep down, all women want a man to take care of them. Don’t you agree?”

Everywhere you look in Egypt, fundamentalists are using information technology to advance their cause. In a residential neighborhood across town from Al Azhar, a 40-something ex-jihadi named Mohammed Nour mans the public relations offices of the deeply conservative, Saudi-linked Salafi religious Nour Party. Nour also runs his own it business, Nourayn Media Group, out of an office dominated by a huge marketing flowchart in English. The complicated game plan for promoting his party calls for developing charter missions and identifying stakeholders. Across from the chart is an equally imposing brass frieze of the Kaaba at Mecca. The money behind the Nour Party speaks for itself. The office has smoked glass doors, a Nestle water cooler, and overstuffed couches with cow-print upholstery. The ringtone of a scarf-swaddled secretary’s cell phone is the Islamic call to prayer.

Nour, who says his business supports his party work, reveres the memory of Steve Jobs. “I like his apps,” he says with a grin. Nour is optimistic that the religious parties’ message will not take just Egypt but go global. Only half joking, he suggests that his party will someday convince Americans that ultraorthodox sharia law would be good for them, too. “Islam is the resolution to corruption, and maybe Egypt can help put sharia law in place and help women in New York.”

Brotherhood members like Nour have a duty to preach Islam to believers and nonbelievers, and historically they have done that face-to-face. But the vast reach of the virtual world is territory that younger Islamists are primed to inhabit. The fact that they can use it to impose a social order in which women must cover themselves and stay home, in which intellectuals may not question theology, and in which the laws of the land are based on Allah’s word belies the notion that an Internet-driven enlightenment is under way in the Middle East.

Many western commentators initially imagined that Twitter and other social media would help liberal revolutionaries promote freedom of thought, speech, and assembly. A study by the Dubai School of Government, conducted in late 2011, found that the number of Facebook users in the Arab world had reached 36 million, an increase of 68 percent in one year; more than 650,000 active Twitter users in the region had generated nearly 37 million tweets through September 2011. Liberals were not the vanguard, however. Instead, in terms of percentage of national populations, users from wealthy, deeply conservative Bahrain and Kuwait led the way. During the same month in 2011, Egypt’s 129,711 revolution-minded tweeters were eclipsed by tweeters from Kuwait and Saudi Arabia, which together generated nearly half of the tweets from the Arab world.

Even in Egypt, it is the fundamentalists who have best captured the might and reach of the web, observes Shadi Hamid, research director of the Brookings Doha Center and an expert on Islamist political parties. Since the uprising, the Muslim Brotherhood has stepped up its activity on Twitter so that members can counter criticisms of the organization as they appear. And the group operates an array of websites in Egypt: Ikhwanonline, its Arabic web portal, aggregates news and columns from the Brotherhood and other sources (ikhwan is the Arabic word for “brotherhood”). Its other web properties include an English-language site with updates on Brotherhood activities and venues with names like Ikhwanbook, Ikhwantube, and Ikhwanwiki.

In December 2010, Khaled Hamza, the supervisor of the Brotherhood’s English-language website, told The Daily Beast that the group had turned its focus away from Western-dominated social media sites like Facebook and YouTube because its users are often reported and blocked for inappropriate posts or religious incitement. (In the event of a secular regime clampdown, the Ikhwan could find itself back where it was before the revolution: underground.) The Muslim Brotherhood therefore uses a wide array of other, more obscure portals, including Ikhwanophobia, purportedly run by academic intellectuals intent on deflecting Western criticism.

As Islamic parties take the reins of Egypt’s politics, their web outreach has grown more diverse. Some sites reach out to the not-yet-faithful. Others, like Doaahonline (the name invokes a “call to prayer”), are unabashedly religious, with pages devoted to Islamic civilization and the historical accuracy of the Koran.

As the Arab Spring played out over the past year and a half—as Egypt’s first free presidential ballots were totaled up in late May, and Morsi faced off against a former general, Ahmed Shafik, in June—social media gave a platform to the competing voices and points of view silenced for decades under the jackboots of various Arab regimes. The liberal posts of Egypt’s secular revolutionaries, given so much play in the Western media, can still be found on Twitter. Yet on the ground in Egypt, their effort was disorganized and underfunded. Their message, so popular in cities like Los Angeles and New York, lacked resonance with most Egyptians, while web-savvy Islamist groups struck a national chord.

The irony is that the Western-sourced technology that enabled a flowering of open discourse is now at the service of conservative theocrats, who are poised to drive Arab society squarely away from Western notions of liberty and free speech.