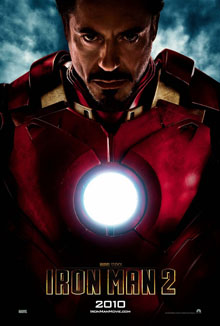 Like a lot of summer blockbusters, this sequel stretches the laws of physics and the capabilities of modern technology. But, admirably, a lot of the tech in Iron Man 2 is grounded in fact.

Spoiler Alert! Read on at your own risk.

Being Iron Man is killing Tony Stark. As this sequel begins, the palladium core that powers the suit and keeps Stark alive is raising toxicity levels in his bloodstream to alarming highs. It's not hard to see why Iron Man would try palladium—the now-infamous cold fusion experiments that created a storm of hype in 1989 relied on the metal. And it's true that palladium does have some toxicity, though it's been used in alloys for dentistry and jewelry-making.

Having exhausted the known elements in the search for a better power source, Stark, ever the DIY enthusiast, builds a particle collider in his workshop. This is actually not crazy: Physicist Todd Satogata of Brookhaven National Lab says you can build tiny particle colliders; even whiz-kid teenagers do it.

Powering the accelerator, however, might be an issue. 2.5 miles long, Brookhaven's superconducting collider needs 10 to 15 megawatts of power—enough for 10,000 or 15,000 homes. "For Stark to run his accelerator, he's gotta make a deal with his power company or he's gotta have some sort of serious power plant in his backyard," Satogata says [Popular Mechanics].

In addition, Stark doesn't appear to have the magnets needed to focus a beam as tightly as he does in the film, where it shreds his shop before he gets it focused in the right place. And, as we covered with the recent discovery of element 117, the ultra-heavy lab-created elements that Stark could have created in his accelerator don't last long. However, back in 1994 when only 106 elements dotted the periodic table, DISCOVER discussed the idea some physicists have of an "island of stability" where elements we've yet to discover/create might be able to exist in a stable way. Perhaps Tony found it.

The guts of the suit

After a long quest, the U.S. military gets its hands on Stark's most magnificent piece of technology, the Iron Man suit. What they saw when they looked inside was the work of special effect wiz Clark Schaffer.

The silvery suit, originally seen in the first "Iron Man," is shown again in the new movie in an "autopsy" scene in which the government begins tearing it apart to see how it works. "[The filmmakers] wanted it to look like what you see under the skin of a jet," said Schaffer, who, along with friend and modeler Randy Cooper, worked on the suit in Los Angeles for six weeks. "There's an aesthetic to it. I try to make it look as functional and practical as possible but also something that has beauty to it. That was my baby" [Salt Lake Tribune].

But how might the Iron Man suit be able to stand up to the punishment Stark continually receives? Tech News Daily proposes that he took advantage of something scientists are developing now: carbon nanotube foam with great cushioning power.

Iron Man's nemesis in this second installment is Ivan Vanko, played by the villainous and murky Mickey Rourke, who you might have seen in previews stalking around a racetrack with seemingly electrified prostheses attached to his arms. The explanation in the film is hand-waved a bit, but it seems Vanko's weapons rely on plasma.

Scientists actually are developing weapons based on plasma, such as the StunStrike, which essentially fires a bolt of lightning, creating an electrical charge through a stream of plasma. Researchers have recently even created what appears to be ball lightning in microwave ovens, which Iron Man's "repulsor blasts" resemble [Tech News Daily].

Vanko isn't happy with just amazing plasma tentacles, though. Working for Stark's rival military-industrialist Justin Hammer (Sam Rockwell), he develops a horde of ghastly humanoid drones for each branch of the military. That, of course, is straight out of science fact—our military relies increasing on robots, be they unmanned aerial vehicles, bots on the ground that investigate roadside bombs, or even unmanned subs currently under development.

He's a hacker, too, seizing control of an Iron Man suit worn by Don Cheadle as Stark sidekick James Rhodes. As DISCOVER covered in December, that's a real-life worry, too. Hackers figured out how to steal the video feeds from our Predator drones because of an encryption lapse at one step in the process.

Related Content: DISCOVER: 10 Obscure Elements That Are Most Important Than You'd Think

(gallery) DISCOVER: An Island of Stability

, and 2 more amazing science projects DISCOVER: The Science and the Fiction

presents the best and worst use of science in sci-fi films 80beats: A Hack of the Drones: Insurgents Spy on Spy Planes with $26 Software