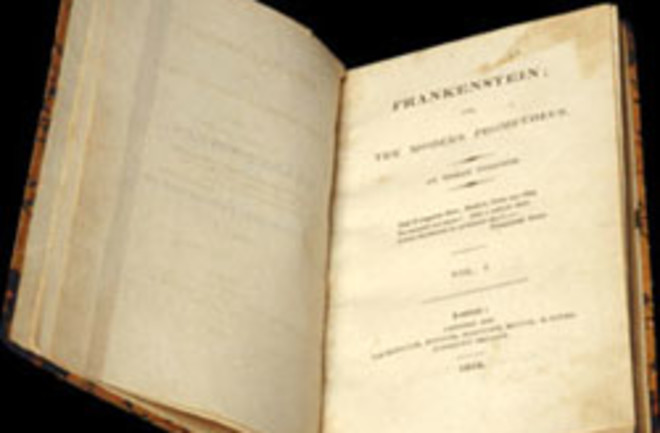 io9, the new-ish Gawker blog about science fiction, has taken offense at Discover. Heaps and gobs of offense. All about our li'l column "20 Things You Didn't Know About Science Fiction." Annalee Newitz, the lead editor of the blog, attempts to scare-quote and exclamation-point our lighthearted column into Internet ignominy. The complaints, such as they are, range from wrong to not right to long on sarcasm, short on logic. The most concrete gripe concerns our claim that "in 1926 writer Hugo Gernsback founded Amazing Stories, the first true science-fiction magazine." Newitz says this honor actually belongs to Mary Shelley for writing Frankenstein. Which raised a question in my mind, one that I pose to our readers: Have you picked up that latest issue of Frankenstein Magazine yet? It contains the entire story of Frankenstein's monster in one bound volume. Yeah, that heavy, leather thing that says, "Frankenstein, or, The Modern Prometheus," on the cover. Speaking of the cover, it's fairly hard… Come to think of it, this particular issue of Frankenstein Magazine is not entirely without book-like qualities. Rather book-ish, you might say. Okay, the goddamn thing is actually a book—arguably a sci-fi book—and being a book, it's really pretty surely not at all a sci-fi magazine. And like so the post goes on for some length, twisting and misconstruing bits in order to disagree with them—a factoid about Alice B. Sheldon being thought a spy becomes our surprise that women write sci-fi; a punchline about Pan Am being dead becomes "THREE writers [getting] so lazy" that they make a joke, or use too many words in the punchline, or commit some other capital crime. io9 has constructed a napalm-drenched straw man stuck in the path of a thresher mounted with blowtorches. (I hope the video hits YouTube soon.)

Maybe she doesn't want Discover to talk about science fiction

—although the genre's been around ever since Frankenstein Magazine #1 (we have a copy stored lovingly in a mylar bag in the Discover office) was published in 1818, it now belongs entirely to io9, all of four months old? Now that sci-fi's on my brain, I have a couple other theories about what's going on here. I think that Newitz might not have meant to write this post—that she may have been compelled to do so by science-fictional forces beyond her control. Specifically, it could be: 1] Robot overlords are ordering her around. That tag at the top of the post ("rant") is actually a directive from above. (I'm picturing bossy, interrupting bots.) The robots may be experimenting on us by sowing dissent among science-oriented publications—feeling out our society's weaknesses. And I, for one, welcome our robotic overlords… 2] Newitz is a guinea pig for a Matrix-like device that's supposed to convert her thoughts to actions in a supercomputer somewhere in the world (okay, it's in the Googleplex)—actions like writing out a blog post. Except this beta version is running some buggy OS, or the firmware's out of date, and Newitz is trapped inside The System saying substantive, meaningful, correct things. But they can't get out. Maybe she can send us veiled messages to let us know she's okay inside there. Give us a shout, Annalee—or a wink, or an eye-flutter, or at least a few more links.