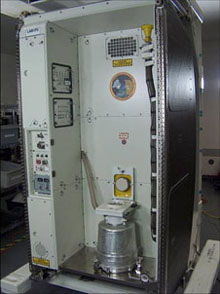 For the three crew members living aboard the International Space Station, sustainability isn’t a choice, it’s a necessity.The station is already powered by solar energy, but still relies on water sent periodically from Earth.On Friday, NASA’s space shuttle Endeavor will begin a special mission to deliver a water recovery system to the ISS that will recycle the crew’s urine and exhaled water vapor into drinkable water.Former ISS crew member Donald Pettit said thinking of the system as a fancy coffee machine might make the water go down easier: “It’s going to take yesterday’s coffee and make it into today’s coffee.” Or something like that.

Endeavor’s 15-day mission will give the decade-old ISS a complete truss-to-truss makeover.It will also deliver state-of-the-art exercise equipment, an extra fridge (the current one is reserved for science experiments, so the crew has been drinking lukewarm orange juice), an extra toilet, and sleeping quarters.The expansion will allow the station to house three more long-term crew members from Canada, Europe and Japan, all of whom are scheduled to arrive next spring.Astronauts arriving on the Endeavour will also help the current crew tackle a huge cleaning job, including four space walks to scrub the outside of the station.

Another new addition to the ISS is a blog by astronaut Sandra Magnus, who’s going up with Endeavor.She’ll beam back periodic updates during her four month stay.Which is good news for all those mourning the end of Mars Phoenix Lander’s Twitter tweets.