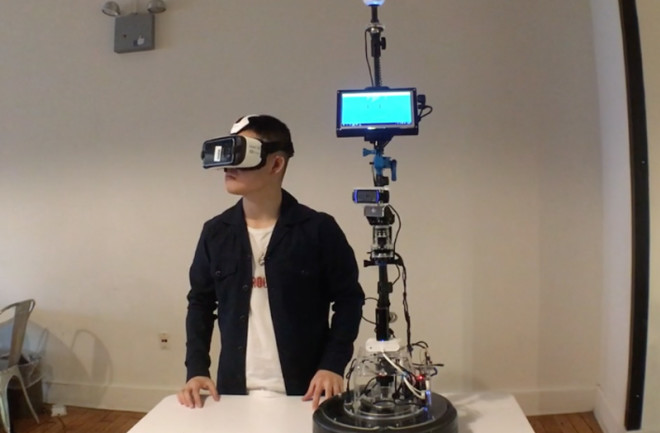 (Credit: Rubin Huang) Who hasn’t, at some point, wished they could exist in two places at once? Today, you certainly can do that, but in practice, it’s far less sexy than cloning yourself or traveling back and forth through time to simultaneously exist in overlapping timelines. Instead, duplicating yourself entails beaming your face through a tablet device that’s mounted atop a moving pole. Indeed, telepresence robots on the market today are essentially Skype on wheels; they’re expensive; they’re hardly immersive; they're a little awkward.

So, self-described technologist Rubin Huang saw an opportunity to hack a better way to duplicate himself. His inspiration? Seeing his cat ride a Roomba—as they are wont to do. "What will be an affordable platform for me to build the robot upon?" Huang wrote. "I suddenly saw my cat is riding my roommate's Roomba! That's it!" Huang cobbled together an assortment of off-the-shelf hardware, such as a 360-degree camera, touchscreen, webcam and Bluetooth speaker. Then, he designed custom mounts to load the devices atop a Roomba and plugged them into mini-computers and controllers. To establish two-way communication, he added a Wi-Fi adapter to the system. Huang also needed to craft his own software to bring all the components together. If you’re interested in the nitty-gritty details of his project, Huang published an incredible detailed do-it-yourself guide online. The so-called Teleroomba’s movements are controlled with a gaming joystick, but as Huang demonstrates, one of the onboard cameras can be controlled with a virtual-reality headset. He linked the camera to the VR set’s gyroscope with the camera to synchronize its motion with the user’s head movements. As the cherry on top, Huang added an LED light indicator that lets people know where the robot (you?) is heading. [embed]https://i.imgur.com/u5n4CHH.mp4[/embed] Here’s the real kicker: Huang assembled the whole thing for $700 less than the basic devices that are currently available on the market. Huang's ingenious design adds another chapter to a history of creative Roomba hacks that stretches back more than a decade. Jack Elston, Cory Dixon, and Maciej Stachura lifted the hoods on the autonomous vacuums to turn them into live-action Pac-Man components. While users can control Pac-Man, the ghosts are all autonomous. In 2006, hackers turned Roombas into battle bots. Roombas have also created art, played basketball, enhanced Wi-Fi signals and served as butlers.

Today, there are hundreds of resources available for reprogramming the bot, including

which is probably a good place to start. Now, the ball's in your court: How would you hack a Roomba?