Inside a Blast-Proof Bubble

This inflatable structure is more blast resistant than a building. 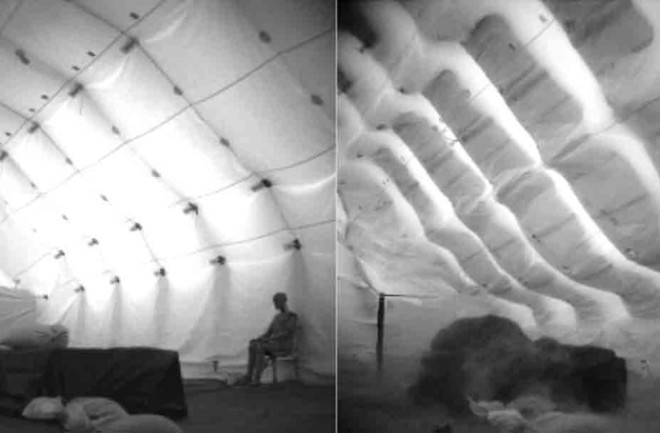 A photo sequence shows how the flexible structures can absorb the energy of a blast shock wave. (Credit: Dynamic Air Shelter)

At some oil refineries, workers eat lunch in something that resembles a cross between a hangar and a circus tent. Despite its bouncy-house look, it’s the safest place for them to be during an explosion.

And they have Harold Warner to thank. For the past decade, the Canadian entrepreneur has been manufacturing shelters with flexible, air-filled walls that protect not only oil workers, but also soldiers and others in blast-prone environments.

His first shelters, created for outdoor events, were basically tied-down balloons made to withstand strong winds. But after an explosion at a Texas City refinery killed 15 people in 2005, an engineer called him, wondering whether Warner's shelters might have saved lives. Two years later, at a military site, they tested the idea. The equivalent of 2,000 kilograms (a little over 2 tons) of TNT detonated about 100 paces away from one of the shelters. The tent withstood the explosion’s shock wave, which was roughly 1.5 times greater than what would cause most residential buildings to collapse.

The shelter starts as sheets of PVC-coated polyester, a material that at lesser strengths is used for industrial tarps and pool covers. The sheets then get shaped into hollow columns. To create the shelter’s scaffold, pieces are then fused together with both traditional welding and radio-frequency welding, which uses electromagnetic forces instead of external heat.

Once on site, those columns are pumped full of air and tethered to anchors. During an explosion, instead of cracking with the shock wave’s pressure as a harder material might, the air-filled walls move with it.

The wave ripples through the fabric, transferring most of the energy to the ground on the other side. The anchored walls then bounce back into shape. Inside, you’d notice the columns bending and flexing around you — a much better sight than the deadly alternative.

"This article originally appeared in print as "Blow-Up Bomb Shelter."