In the Future, Airplane Wings Will Flap 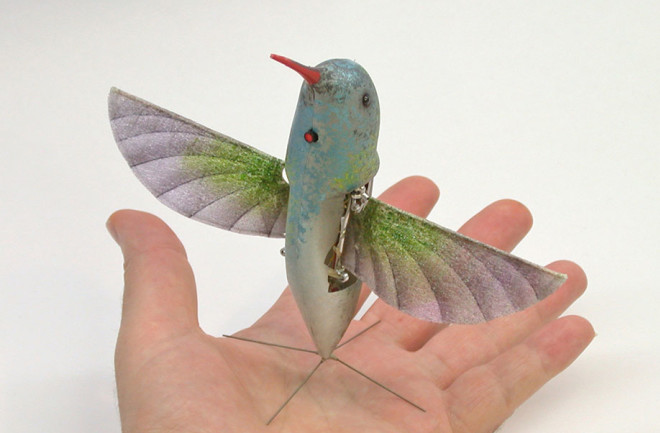 The Nano Hummingbird could be among the first of many bird-based flying machines. | Courtesy AeroVironment Inc.

When it comes to maneuverability, modern flying machines pale in comparison to an everyday pigeon. Birds can flap their wings to swoop, dive, glide, and alight on perches. Fixed-wing airplanes and rotary-wing helicopters rarely show that dynamism. In recent years, though, scientists have started finding ways to mimic the mechanics of bird flight through various robotic ornithopters, aircraft that fly with flapping wings. Aircraft based on today’s lab experiments could soon find use in military or search-and-rescue missions.

Illustration of SmartBird, a prototype flier made by Festo. | Kellie Jaeger

One of the most impressive of the new flock is SmartBird, a prototype flier made by Festo, a German-based automation technology company. The remote-controlled aircraft has wowed audiences on a worldwide tour as it uncannily flies like its avian inspiration, a herring gull. Made mainly of carbon fiber, SmartBird weighs 0.88 pound and has a wingspan of 6.6 feet. A motor, housed in the torso, drives the lightweight wings and requires only a 7.4-volt battery to operate. The inner section of the machine’s split wings produces lift; propulsion comes from the outer wing area.

As the wings beat up and down, they aerodynamically twist to change their angle of attack (tilting upward or downward), using the same technique birds use to generate thrust. Meanwhile, the tail section tilts and rotates to guide the robot left or right, analogous to the way a bird’s tail feathers help with control and guidance.

As the wings of SmartBird beat up and down, they aerodynamically twist to change their angle, just as real birds' wings do. | Kellie Jaeger

Festo does not plan any further generations of the SmartBird, and ornithopters in general still have a long way to go—especially in being able to land like a bird—before they are ready for the runway. “I don’t think jet airliners will be flapping anytime soon,” says Russ Tedrake of the Robot Locomotion Group at MIT, which has experimented with a flapping-wing craft dubbed “Phoenix.” “But it’s likely we’ll see some sort of application in the military.”

To that end, a company called AeroVironment, with funding from Darpa (the research wing of the U.S. military), unveiled its Nano Hummingbird in 2011. This battery-powered, camera-equipped, floridly painted robot can precisely hover and fly forward. More advanced versions of this palm-size flapper could spy and perform reconnaissance while acting like an ordinary hummingbird in the bush.