In Soviet Russia, ATMs Interrogate YOU 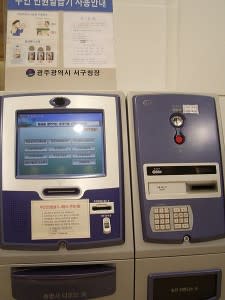 Not just the Russians: A biometric ATM in Korea

ATMs in Russia may soon be outfitted with intelligence services–style lie detection software, designed to help banks pick out consumer credit fraud---without bank employees actually having to go through the arduous business of talking to and evaluating potential cardholders. People will be able to apply for credit cards by chatting with one of the new machines about their financial history. But these ATMs won't just take your word for it: They come equipped with voice analysis software meant to pick out telltale signs of lying, made by a company that supplies nifty technologies to the Federal Security Service, a successor to the KGB. Even better, these new cash-and-credit dispensers are currently being developed by the country's biggest bank, Sberbank---of which the Russian government is the majority shareholder. To design these voice analysis programs, the company put to use hours and hour of interrogations recorded by the Russian police, in which the person being question was found to be lying. The stress of lying is thought to cause involuntary physiological changes that alter the patterns of a person's voice. The software's hard to fool, the company says, since, like a polygraph, it senses bodily responses people can't willfully control. Very comforting, given polygraphs' undisputed accuracy

. But don't worry, the ATMs don't just glean information from someone's voice before evaluating whether to grant a line of credit. They also scan the customer's passports, take their fingerprints, and make a 3D scans of their face, so that facial recognition software can pick them out later on. That way, you can hand over all your financial and biometric information to the Russian government---er, bank---in one handy package. [via The New York Times