In Paris, a Glimpse of Public Transportation's Driverless Future 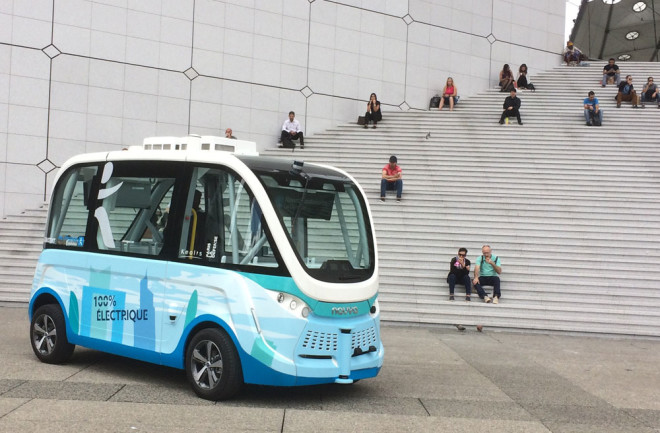 The NAVYA. (Credit: Christina Reed) France may be famous for its cheese and wine, but it’s also a longtime leader in driverless transit. The country boasted one of the earliest models of automatic trains in 1983. In Paris, two metro lines currently run without a conductor onboard. And the push toward driverless transportation continues in this city, with several planned upgrades before it plays host to the summer Olympics in 2024. So it was with high expectations and a sense of history that I boarded the driverless Line 1 to the bustling business district of La Défense, just west of the Paris city limits. There, I would try out the newly installed “Navette Autonome,” an autonomous shuttle bus from French company NAVYA. Though the United States has the lead in trying to mainstream automatic cars, NAVYA already has 45 automatic shuttle vans in operation around the world. The company claims it’s delivered 170,000 passengers since it launched in Lyon in 2015, and this year plans to open a plant in Saline, Mich. to build 25 American-made autonomous shuttles. “We feel it’s the perfect location for us,” said NAVYA CEO Christophe Sapet in a statement, citing strong government, community support and an excellent talent pool.

What Drove Us Here

After leaving the metro, it took me a while to find the stop where I was supposed to board the driverless shuttle. In the meantime, I strode through a summer market, with its maze of food and drink kiosks, which had taken up most of the esplanade in front of La Grande Arche. A band played in front of the steps of the looming monument. In 1981, the world’s first driverless, automated guideway transit system began shuttling commuters four miles between Kobe and Port Island, Japan. The year after the Arche design was chosen, Véhicule Automatique Léger (VAL) started moving people, sans drivers, in Lille. By the time the Arche was finished in 1989, VAL transit systems had popped up all around France. In Vancouver, Canada, with its SkyTrain at Expo ’86, they showed the world that driverless Advanced Rapid Transit was the wave of the future. The three NAVYA shuttles now touring the pedestrian esplanade of La Défense will soon be the first of their fleet, starting in September, to run without a courtesy operator on board. For now, “operators are currently in place to reassure passengers and comply with open road legislation,” explained consultant Shelley Gore. Operators can manipulate the vehicle and override door control if they want, for example closing the doors early if no one is waiting at a stop and none of the passengers want off.

Standing on a ramped platform, I waited with a South Korean tourist 20 minutes for the shuttle to approach—during peak hours, one should be along every 10 minutes. We watched as what looked like a small school bus parallel parked, perfectly, alongside us. Then several people joined us to board. While the vehicle is capable of going 28 miles per hour, around the esplanade it’s top speed is three. We went slightly less than two. The large windows provided a nice view, but did not open and the sun’s rays soon overwhelmed the meager air conditioning. At the next platform, some passengers had to stand. As we rolled away from the platform and got up to a walkable cruising speed, a pigeon flew in front of the vehicle. Immediately, the automatic sensors triggered the brakes, and we all lurched forward. Those standing nearly fell on top of the kids in the front who were kneeling on the seats to enjoy the view. We all laughed. It may have been a slow, bumpy ride, but we got where we were going.