Imagining a World Without Traffic Lights 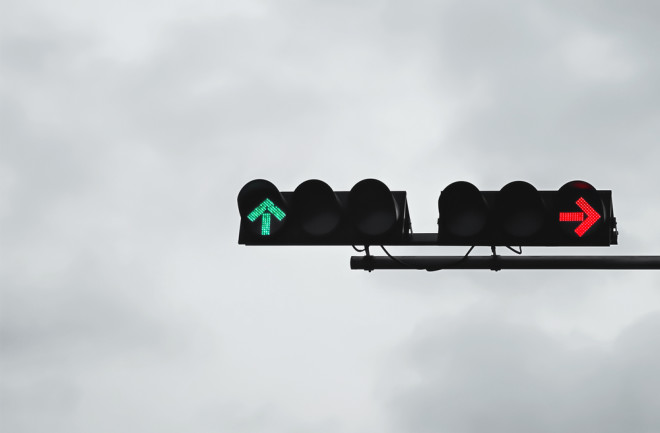 Getting stuck in traffic, like death and taxes, is just part life for people who drive vehicles to get from point A to B. Traffic jams are the result of competition for a scarce and highly valuable resource — the open road, and by extension, our freedom to travel where and when we want. Our traffic woes are compounded, however, by human fallibility. Drivers are often reckless, distracted or overly cautious, and each small mistake on the road propagates throughout the whole system. With the era of driverless cars fast approaching, human incompetence may be removed from the driving equation entirely, according to new research from scientists at MIT. Instead of racing to beat yellow lights, or bemoaning an excruciatingly stale red light, they've shown that a centrally-controlled system in constant communication with every car on the road could synchronize the flow of traffic to optimize travel times and send us racing fearlessly through four-way intersections. In other words, traffic lights may someday go the way of pay phones — urban relics that remind us of simpler times.

A World Without Traffic Lights

The researchers built a computer model that simulated traffic conditions at an intersection under the control of both a normal stoplight and a computer algorithm that adjusted approaching vehicles' speeds. The algorithm, theoretically, communicates with cars to deduce their trajectories and directions to determine the exact moment they will pass through the intersection. The computer-vehicle interface adjusts the speed of individual automobiles so that numerous drivers can simultaneously zip through an intersection unscathed. In a second iteration of the test, the researchers grouped cars into "platoons" that went through the lights together, making the system even more efficient. Ultimately, the algorithm eliminates the need for any pauses in traffic by removing unpredictability and reading any sudden increases in traffic in advance. So-called "slot-based" systems are already in use at airports, where air traffic controllers assign each incoming plane a "slot," or window, during which it can land, and aircraft slow down or speed up to hit the time frame. The results of their tests were clear — traffic signals are far from the most efficient way to control intersections in an Internet-of-everything world. Under the command of a computer, the number of cars passing through the intersection doubled in the same amount of time. They recently published their findings in the journal PLOS ONE. [embed]https://www.youtube.com/watch?v=nVUDFizBLxw[/embed] No lights, no problem?

The algorithm worked so well because it knew exactly where each car was going and when it would arrive, something that is impossible to do in a system involving countless individuals who don't always act rationally. We've all experienced drivers who brake for no good reason, or who decide to suddenly switch lanes. By taking the element of human unpredictability out of the system, the computer reduced the problem to a mathematical equation. [embed]https://www.youtube.com/watch?v=4CZc3erc_l4[/embed]

Not Likely in Near Future

This is proof-of-concept that computer-controlled traffic could cut commute times and accommodate more drivers, but don't expect red lights to disappear anytime soon. Google and other tech companies, to be sure, are making strides toward developing driverless cars, but refining these technologies into consumer-ready products still requires work. Convincing consumers to make the switch to a driverless car could take even longer. A recent AAA study found that three-fourths of drivers would be afraid of riding in an autonomous car, and only slightly more than half of respondents would consider buying cars with semi-autonomous features. Paulo Santi, a co-author of the study, is more optimistic about the implementation of his research. Speaking to BGR, he said the system could be implemented in a much shorter time frame, even without driverless cars. “In terms of what kind of technology you would need, you won’t need to wait 20 years,” Santi said. “We don’t need autonomous driving. It’s actually much simpler.” However, a computer-controlled intersection, as detailed in the study, could be thrown off by a single maverick driver who decides to take control of a vehicle himself, thereby throwing off the precise timing set out by the algorithm. For such a system to work, the computer would need to have absolute control over every variable, and every vehicle would need to be connected to "the grid." There also wasn't mention of when pedestrians would cross these optimized intersections. Still, major automobile manufacturers are taking steps to build "smarter" vehicles. Wi-Fi connectivity, cameras, radar and other sensors are already enhancing safety by tuning vehicles into what's happening in the world around them. The National Highway Traffic Safety Administration announced a pact last week among 20 automakers to make automatic emergency braking a standard feature on all vehicles by 2022. Other options, like lane-departure warnings and collision avoidance, already warn drivers of potential mishaps, and even take steps to avoid them with mechanical precision. It may take a few years or decades, but someday updating Facebook and eating breakfast while "driving" won't be considered cultural faux pas. Still, if it ever hits the streets, playing a computer-optimized game of chicken could still be unsettling for beta testers of MIT's intersection technology.