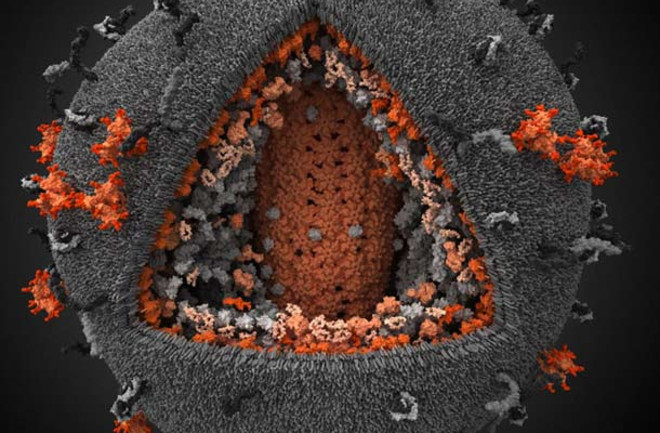 And now for some Friday eye candy.

One of the finest visual treats of the year comes when the National Science Foundation and its partners reveal the winners of the International Science and Engineering Visualization Challenge, as they have this week in the journal Science. The illustration you see above is HIV. Created by Ivan Konstantinov and colleagues, the 3D model of the virus graced the cover of Nature Medicine last year.

The model contains 17 different viral and cellular proteins and the membrane incorporates 160 thousand lipid molecules, of 8 different types, in the same proportions as in an actual HIV particle. It denotes the parts encoded by the virus’s own genome in orange, while grey shades indicate structures taken into the virus when it interacts with a human cell. To create the visualisation, the team consulted over 100 articles on HIV from leading science journals and talked to experts in the field. [New Scientist]

The other winners, which you can check out at Science’s site, include the wide world of fungi, colliding quasars, and (my favorite) the hairs of a tomato seed, seen below.

The hairs secrete a mucus that appears as a clear membrane at the edge of the seed, according to photographer Robert Rock Belliveau, a retired pathologist. This mucus has several purposes: killing predators with a natural insecticide, preventing the seed from drying out, and anchoring the seed to the soil. [National Geographic]

If you’re in the mood to gawk at more neat visualizations of science, check out the recent DISCOVER galleries of the telescope to replace Hubble, amazing supercomputer simulations, or the most psychedelic images in science.