If You Stick an Mp3 Player to Your Palate, You Can Feel Music in Your Bones 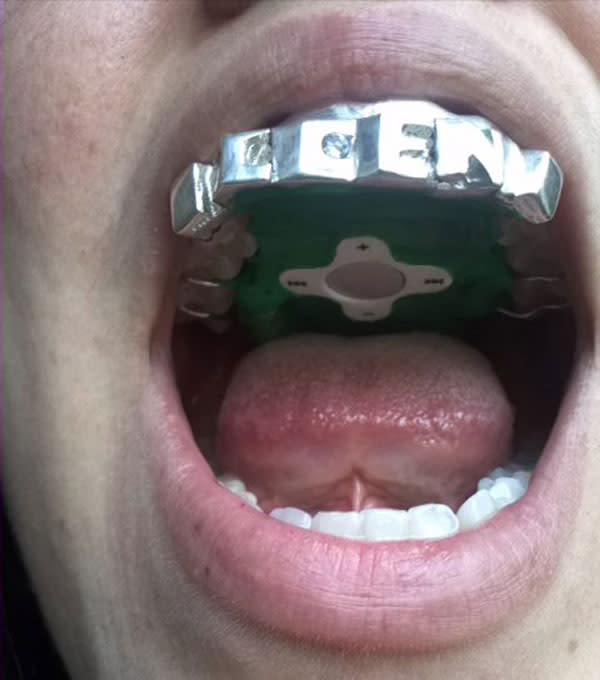 , anyone?). But if this new art project works as advertised, it's pretty neat. This piece of retainer-like jewelry is the creation of Aisen Chacin

, a student at Parsons School of Design in New York. It differs in one very important way from the standard rapper's grill

: it includes a motor hooked up to the headphone jack of an iPod that lies flush against the wearer's palate. To play your tunes, you manipulate the iPod's controls with your tongue, and, thanks to the pulsing of the motor against your teeth, you can hear the music. That's thanks to a phenomenon called bone conduction

, which allows sound to be transmitted to your hearing apparatus by the vibration of bones rather than the vibration of air hitting your ear drum. It's why your voice on a recording sounds different than the voice you hear when you speak, and it's the basis of certain hearing aids, as well as some headsets worn by divers so they can receive messages from people out of the water. In fact, it was Hugo Gernsback

, renowned editor of pulp science fiction magazines and namesake of the Hugo Awards

, who, in 1923, came up with the idea of a bone-conducting hearing aid. You can see drawings of it here

. Basically, your skull is a built-in subwoofer. http://youtu.be/0t85Yj193uw We're a bit worried about the longevity of the iPod---how is three hours in someone's mouth different from a dunk in the toilet?---and we're not totally convinced by the reaction of the tester in the demo video above, who seems bemused by the whole experience. But we like the idea. [via PopSci