IBM’s “DNA Transistor” Could Sequence Genomes on the Cheap 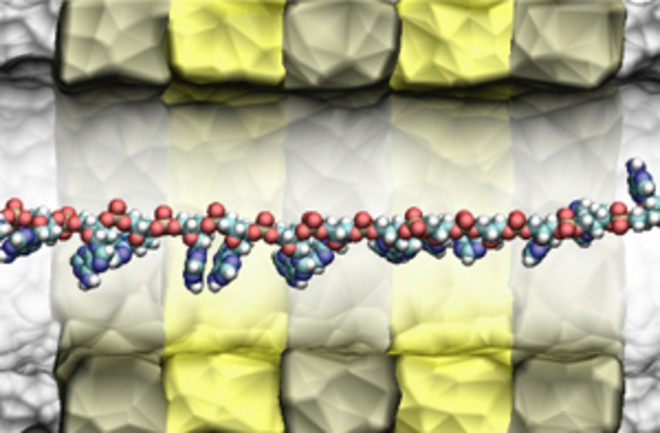 When the Human Genome Project finished sequencing the first human genome earlier this decade, the price tag for the endeavor had reached almost $3 billion. Now, IBM has announced details of its effort to bring the cost of sequencing a person's genome down to below $1,000--and the company says it could go as low as $100. While IBM is hardly the only company racing towards these goals, the company's chip-based approach makes it a serious contender. The company's technique involves

drilling tiny nanometer-size holes through computer-like silicon chips, then passing DNA strands through them to read the information contained in their genetic code. “We are merging computational biology and nanotechnology skills to produce something that will be very useful to the future of medicine” [Wired.com]

, says IBM scientist Gustavo Stolovitzky. Stolovitzky says the work could usher in a new era of personalized medicine, in which patients routinely have their genomes scanned to help doctors make medical decisions.

"Ultimately, it could improve the quality of medical care by identifying patients who will gain the greatest benefit from a particular medicine and those who are most at risk of adverse reaction," said Stolovitzky [InformationWeek].

Because DNA naturally carries a net electric charge, simply applying a voltage across the two sides of the chip drives the DNA strands through the holes [BBC News].

The process could be fast and efficient, with hundreds or thousands of DNA strands passing through the holes, also called nanopores, on a single chip. Other companies are experimenting with nanopore DNA sequencing techniques, but the stumbling block has been getting the DNA strands to move through the holes at a controlled pace, to allow enough time to identify the individual nucleotides (the letters of the genetic code) as they pass through. The IBM team thinks that by cyclically turning on and off the voltage around the nanopore, the DNA strand could be coaxed through at a steady rate. However, the researchers haven't tested this technique yet, and they expect that it will take about three years to get a working prototype.

They also need to determine exactly how the DNA will be decoded when it passes through the nanopore. It’s an area of “intense research” within and outside of IBM, says Stolovitzky. One way to do it would be to measure the electrical properties of the different DNA bases such as capacitance and conductivity [Wired.com].