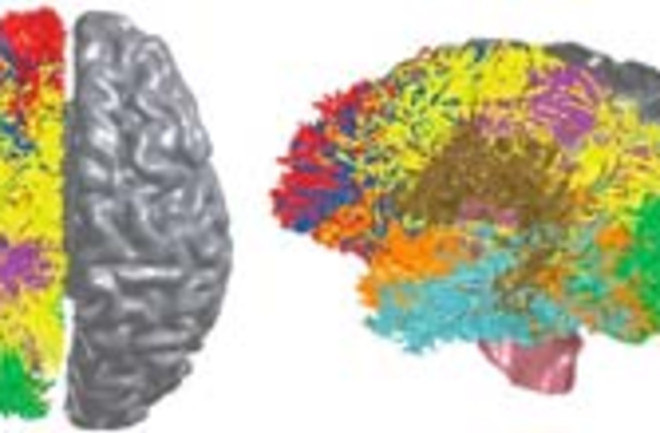 An artificial brain as powerful as a human's remains a distant goal, but scientists are inching closer. This week IBM announced that by using a brain-simulating algorithm called BlueMatter, researchers created an artificial brain simulation that packs more brainpower than a cat.

Researchers used an IBM supercomputer at the Lawrence Livermore Lab to model the movement of data through a structure with 1 billion neurons and 10 trillion synapses, which allowed them to see how information "percolates" through a system that's comparable to a feline cerebral cortex [San Jose Mercury News]

. The team's previous effort two years ago, modeled after a rat brain, simulated only about 55 million neurons. The staggering surge in computing power has engineers like IBM's Dharmendra Modha drooling over the possibilities for more brain-like computers.

By reverse engineering [the] cortical structure, Modha says, researchers could give machines the ability to interpret biological senses such as sight, hearing and touch. And artificial machine brains could process, intelligently, senses that don't currently exist in the natural world, such as radar and laser range-finding [Popular Mechanics].

It should come as no surprise that the design suggests such military applications, as DARPA provided much of the funding. But like the Internet and other technologies originally developed for the military, BlueMatter's abilities could lead in a multitude of directions.

"As our digital and physical worlds collide, there is a tsunami of information," Modha said. "There is a need for a new kind of intelligence that can sort through, prioritize and extract the most important information, much like how the brain deals with sight, sounds, tastes, touch and smell" [San Jose Mercury News].