IBM May Have the Key to Wireless Hi-Def Video 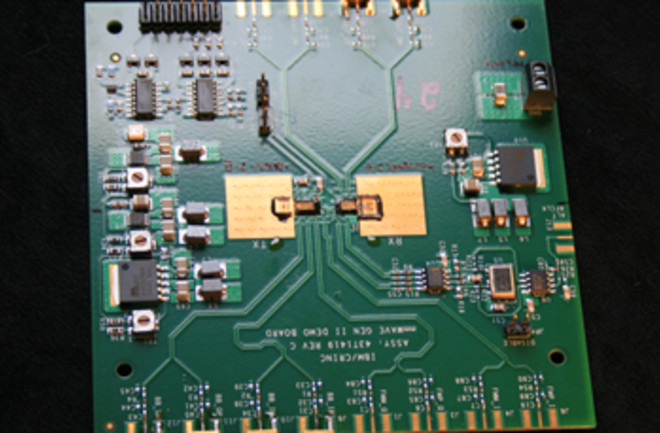 Who doesn’t love wireless? Surfing the Web while sipping a latte atyour favorite café certainly beats being chained to a modem by a datacable. But for applications that demand a really fast connection, suchas watching live high-definition television, today’s WiFi falls short.The fastest WiFi available maxes out at 600 million bits per second,fine for watching a clip from YouTube but far from the billions of bitsper second that HDTV can require.

The reason for WiFi’s limit is that the equipment it uses typicallyoperates at radio frequencies just above 2.4 gigahertz. All else beingequal, there is a direct relationship between the frequency of a waveand the amount of data it can carry: The higher it goes, the more datayou can squeeze in. However, the higher the frequency, the more itcosts to build the corresponding radio hardware.

IBM is attacking the problem by building a wireless system thatoperates at 60 gigahertz. To minimize cost, IBM is working to fit theradio equipment onto an integrated circuit that can be made cheaply.The key here is what is called a (brace yourself) heterojunctionbipolar transistor. This device can switch on and off more quickly thanother transistors, allowing it to manipulate high-frequency radiowaves. IBM has demonstrated a setup that can handle the 2 billion bitsper second needed to transmit HDTV at a resolution of 1080i. (Fordigital TV neophytes, 1080i signifies a picture with a resolution of1,920 by 1,080 pixels.) In a few years a central media player in yourhome will be able to beam high-definition video to your TV or laptop,eliminating the rat’s nest of cables dangling behind the entertainmentcenter.

Jawbone Bluetooth Headset ($130)Bluetooth is a low-bandwidth, low-power technology ideal for cell phone wireless headsets. But hearing a call on a busy street can be tough, so this headset features a noise-canceling system for clearer calls. www.jawbone.com

Logitech Wave ($50)The company offers a number of ergonomic wireless keyboards and mice that connect via an adapter that plugs into a USB port. www.logitech.com

Conventional transistors are made from a single piece of silicon infused with impurities that alter its electrical properties. Depending on the impurity, the silicon becomes either a p-type or an n-type material (the names relate to how electricity moves through the material). In the regular NPN transistor diagrammed at right, there is a region of p-type silicon in the middle of the transistor (1). Normally the p-type silicon blocks any electric current trying to flow from one side (2) of the transistor to the other (3). But applying a voltage via a wire (4) to the p-type region quickly stops it from blocking the flow. A heterojunction bipolar transistor like the one IBM is developing has a similar structure, but its central region is made of a material (a silicon germanium alloy, for example) different from the rest of the transistor (5). This increases the speed at which the transistor can turn on and off.