I Have Seen the Furniture, and It Is Robotic

As part of my irregular series on Improbable Robotics (such as my post a couple of weeks back on a robot that rocks you to sleep), today we peer into the mind of a creative roboticist from Switzerland, Auke Jan Ijspeert, who is leading a project to develop robotic furniture. I visited Ijspeert's lab, and the astonishing Rolex Learning Center in Lausanne building, a few weeks ago. Ijspeert's project, called Roombots, builds on the idea of "modular robotics." Modular robotics is like roboticized LEGO: Instead of having to build every robot from scratch, we build modules that each have capabilities to sense and to move. These modules have built-in mechanisms to self-assemble into different robots. Here is a quick peek at where Roombots are headed:

Modular robotics is inspired by biology on two different levels:

1) The understanding that the secret of the dizzying diversity of life is modularity: having basic building blocks of the body that lead to mutations in which whole functional modules are duplicated or removed. For example, it turns out that the antenna of insects arose through a duplication of a two-legged body segment. Initially, that segment was probably used to move, but because it's so easy to have more legs, over many generations these extra legs slowly got pressed into serving other roles, such as serving as antennas. This modularity is enabled by the presence of Hox genes, master control genes that pattern the developing body. We share most of our Hox genes with all other forms of animal life, including insects, which diverged from us around 500 million years ago. 2) The cellular basis of life: although we have about 50 trillion cells in our body, we only have around 120 different cell types, most of which we share with other species. With the right general purpose modules, then, we can flexibly recombine them to make a huge number of different things. 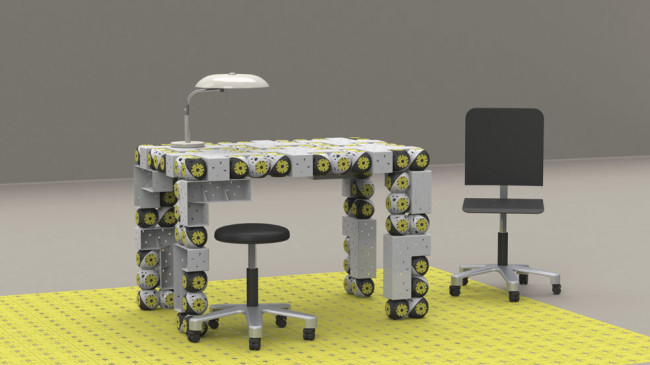 Roombot furniture uses these two principles to adapt to the needs of the user in ways your regular sofa/bed/table sets cannot. Conventional furniture is expensive, large, and heavy. You pick pieces you think will serve your needs most of the time, and you make do when it doesn't because it's too costly to change (like having more people than usual come over to watch a movie on your TV). Because it is large and heavy, you pick a location for each piece and only rarely change it. What if furniture was more dynamic, so you could switch your furniture just like you can switch the playlist that is the music for the evening? This is the vision of Roombots. A coffee table turns into a stool. Several stools can collaborate to turn into a sofa. If you decide to set up shop in a different part of the house, like your front porch, the legs of your Roombotic furniture become more than metaphors, and become the means by which it walks over to where you need it, as seen in the video above. Synthetic image of imagined Roombot table, and simulation of Roombot table walking, courtesy Auke Jan Ijspeert.For further information: See A. Spröwitz, S. Pouya, S. Bonardi, J. van den Kieboom and R. Möckel et al. Roombots: Reconfigurable Robots for Adaptive Furniture (pdf), IEEE Computational Intelligence Magazine, special issue on "Evolutionary and developmental approaches to robotics", vol. 5, num. 3, p. 20-32, 2010.