The half-blimp half-jet saves fuel and requires no transportation infrastructure. 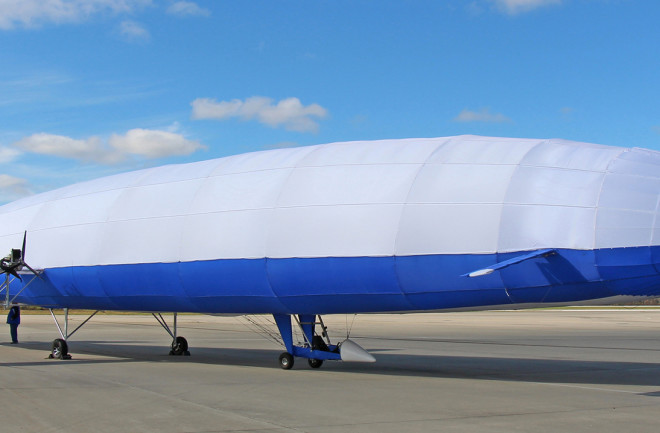 A prototype of the Dynalifter, shown last winter at Toledo Express Airport, has passed preliminary testing. Future Dynalifters would be three to eight times larger than the prototype. The full-scale airship would dwarf a military cargo plane. | Robert Rist

Working at a small college in the shadow of the Goodyear Tire and Rubber Co. and its iconic dirigibles in the late 1990s, computer systems technician Robert Rist was deep into building a blimp-like model with his young son. But as simple as working blimps seemed, Rist had trouble getting his model airborne.

An engineer by nature if not by training, he realized putting wings on the inflatable craft might do the trick. When he sketched his idea for Brian Martin, a friend and co- worker who had studied shipping methods in a business class in college, a lofty vision emerged: They could launch a FedEx-like shipping revolution, powered by airships that slashed air freight costs and reached less-accessible regions.

Before long, the budding entrepreneurs had formed Ohio Airships. The centerpiece of their venture, still in the making after 14 years, is a hybrid aircraft dubbed the Dynalifter. The 120-foot-long, pickle-shaped prototype at Toledo Express Airport resembles a blimp: Its soft but tough skin, similar to a boat’s sail, encases balloon-like cells filled with helium.

But like an airplane, the Dynalifter has wings with propellers that provide about half its lift. The fuselage holds an internal framework modeled after cable-stayed bridge construction, bearing the pressure on towers. This design is the key to enabling future Dynalifters, at about three to eight times the length of the prototype, to lift concentrated loads weighing up to 160 tons without collapsing, as an ordinary blimp surely would.

Ohio Airships will cater to the underserved market in global transportation that lies between jets, ships, trains and trucks. A jet might be four times as fast, but a Dynalifter would consume less fuel and further cut costs by providing more space for large, bulky payloads, from flowers to bulldozers. Makeshift runways would suffice for Dynalifter takeoffs and landings, putting destinations without airports in reach. A Dynalifter could cross oceans, too, and much faster than a ship. Unlike trains and other shipping options, the Dynalifter does not need transportation infrastructure, such as rails, roads or seaports.

After a successful testing of the prototype last winter, Rist continues to seek investors and manufacturers for the roughly $40 million job of creating the first full-fledged Dynalifter. Those other Ohio plane builders, the Wright brothers of Kitty Hawk fame, would have approved.