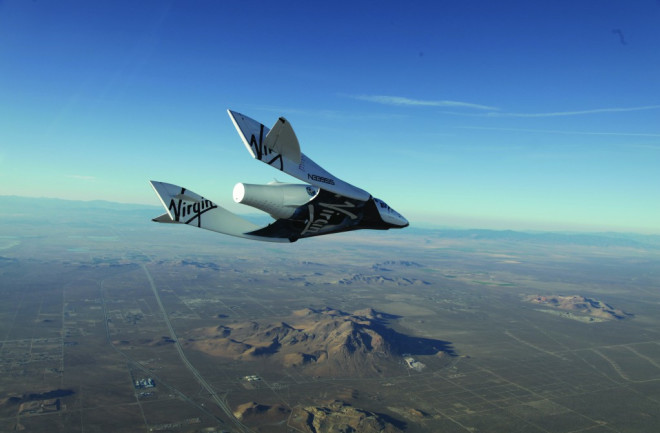 The first SpaceShipTwo during a glide flight over the Mojave desert. Credit: Virgin Galactic Human error played the main role in the midair spaceplane disaster that killed a Virgin Galactic test pilot in October. The simple act of unlocking a braking mechanism 14 seconds too early led to the spaceplane's destruction, according to the U.S. National Transportation Safety Board. But the NTSB's investigation also pointed to a chain of "human factors" related to time pressure and a lack of safeguards that contributed to the copilot's tragic mistake. Such human factors have played a big role in the history of test flight disasters involving experimental aircraft and military jets. The recently-concluded NTSB investigation found that Scaled Composites, the company that designed Virgin Galactic's SpaceShipTwo, failed to consider the possibility of a pilot deploying the "feather" braking mechanism too early. There were no safeguards in place to prevent that potentially catastrophic mistake. Scaled Composites also apparently failed to warn the pilots about the risks of premature feather deployment through either manuals or procedures. When copilot Michael Alsbury prematurely unlocked the feather at a speed of Mach 0.8, aerodynamic forces took over by moving the feather mechanism into its braking position too early. The resulting stress tore SpaceShipTwo apart. Pilot Peter Siebold survived the breakup of the spaceplane and parachuted to safety, but Alsbury died in the accident. "These two test pilots took on an uncommon challenge: testing technologies for manned commercial space flight, which is still in its infancy," said Christopher Hart, chairman of the NTSB, during a public meeting held on July 28. "Human space flight is subject to unique hazards, and test-pilots work in an environment in which unknown hazards might emerge." Human error is responsible for the majority of aviation disasters. But the cases tend to be less about "bad pilots" and more about the human brain's limitations in reacting to certain situations. Since World War II, a field known as human performance or human factors engineering has tried to identify the factors that can contribute to human mistakes. Such factors can include pilot fatigue from not getting enough sleep, distractions within or outside the cockpit, and simple design choices for the aircraft or spacecraft that make human mistakes more likely. Those mistakes become even more potentially deadly in the test flight disasters of experimental aircraft such as SpaceShipTwo. Many lessons from past test flight disasters have been collected in a NASA book titled "Breaking the Mishap Chain," which explains how complex human factors played different roles. Some examples that follow include an experimental rocket-plane disaster, the crash of a futuristic "lifting body" vehicle that inspired "The Six Million Dollar Man" TV show, and a series of human errors that destroyed a $325-million Air Force bomber.

In the late 1950s, NASA worked with the U.S. Navy and Air Force to build the rocket-powered X-15 test aircraft. The X-15 proved a rugged test vehicle capable of flying at speeds of Mach 6 and reach the edge of space at altitudes beyond 50 miles. But one pilot, Mike Adams, lost his life when his X-15 fell into a flat spin as it reentered the atmosphere on Nov. 15, 1967. By the time the X-15 recovered from its spin and entered an inverted dive at Mach 4.7, Adams had lost control. The aerodynamic forces eventually caused the X-15 to break apart. A follow-up investigation found that Adams had suffered from vertigo that made it difficult for him to get his spatial bearings. That meant Adams would have relied heavily on his cockpit instruments to fly his aircraft. Another contributing factor came from electrical malfunctions early on in the flight that forced Adams to divert more of his attention to manually controlling the aircraft, which increased his mental workload.

This photo illustrates how the X-15 rocket-powered aircraft was taken aloft under the wing of a B-52. bomber. Credit: NASA The NASA book puts the biggest blame on the X-15's design of a primary flight display known as the attitude indicator. The display normally shows pilots the orientation of their aircraft, which can make all the difference between a successful flight and catastrophe. But X-15's flight display was designed so that it could switch from its first mode as an attitude indicator to a second mode as a "precision roll indicator." Adams had switched to the second mode during the height of his flight, but had forgotten to switch back to the first mode before trying to guide his aircraft through atmospheric reentry. His misinterpretation of the second mode as the first mode led to piloting decisions that allowed the aircraft to enter its flat spin and subsequent disaster. A better-designed flight display might shown a light or some other signal to clearly indicate the different modes. Adams had also previously trained on an X-15 simulator which only had the flight display in its original mode as attitude indicator. As a result of the disaster, the Accident Investigation Board concluded that a single cockpit display should not be used for two different purposes to avoid pilot confusion.

The M2-F2 aircraft represented a "lifting body" vehicle based on NASA studies and built by the Northrop Corporation in 1966. Its test flights yielded several lessons from a human performance standpoint. In one case, Air Force test pilot Jerauld Gentry was preparing to land the M2-F2 when he realized that he couldn't physically reach the handle to deploy his landing gear. Northrop's engineers had designed the cockpit for pilots of average height without accounting for shorter pilots with shorter arms; an obvious flaw that should have shown up in preflight checkout procedures. Only quick thinking by Gentry prevented disaster; he loosened his shoulder straps enough to lean forward and pull the handle before the aircraft reached the ground. On May 10, 1967, an even more infamous accident led to an M2-F2 piloted by NASA pilot Bruce Peterson crash-landing and tumbling across a dry lakebed. Rescuers found Peterson still strapped in his upside down aircraft with head and arms hanging down, moaning and badly injured but alive. Grainy footage of the incident later became the introduction for the 1970s TV show "The Six Million Dollar Man," which told the story of a test pilot whose body is rebuilt with bionic technology.

The aftermath of the The M2-F2 flight test on May 10, 1967. Credit: NASA A later investigation found that Peterson had struggled with several distractions on top of his busy pilot workload as he fought to keep the M2-F2 under control during his landing approach. First, Peterson instinctively tried using his rudder control to correct his aircraft's "lateral oscillations," which was the wrong move but represented a habit carried over from flying almost any other aircraft. (Other M2-F2 pilots struggled with the same problem.) By the time Peterson had the aircraft under control, he became distracted by the fact that he was flying over an unfamiliar area of the dry lakebed with no runway markers in sight. He also worried constantly about possibly colliding with a rescue helicopter flying nearby. All those distractions delayed him in lowering the landing gear, which led to the M2-F2 crashing. From a human factors standpoint, Peterson faced an overwhelming mental workload coupled with the unwelcome addition of many distractions. That was partly the result of test aircraft becoming increasingly complex to fly by the 1960s. Since that time, computer-aided flight controls have eased some of the mental load for pilots.

The Crash of a B-1 Bomber

In the 1970s, the U.S. Air Force began building a fleet of B-1 strategic bombers that have wings which can sweep forward to maximize lift or sweep back to minimize drag at high speeds. That change in wing position affects the aircraft's center of gravity and flight stability. To maintain stability, the bomber had a system that allowed for either automatic or manual transfer of fuel between different tanks. During a test flight on Aug. 29, 1984, a bomber crew commanded by a pilot named Maj. Richard Reynolds failed to manually adjust the fuel balance to compensate for sweeping the aircraft's wings forward. That led the $325 million aircraft to stall, plummet toward the ground and crash. Reynolds and his copilot activated the escape capsule that rocketed the crew to safety and parachuted them to the ground, but a failed repositioning mechanism and the low altitude meant the capsule hit the ground nose-down with the force of 40 gs. Copilot Doug Benefield died of head injuries as his seat tore loose of its railings. Flight-test engineer Capt. Otto Waniczek suffered a partial collapse of both lungs. Reynolds was temporarily paralyzed but survived with back injuries.

A two-ship formation of B-1B Lancers assigned to the 28th Bomb Squadron, Dyess Air Force Base, Texas, fly in formation over New Mexico during a training mission Feb. 24, 2010. Credit: U.S. Air Force photo/Master Sgt. Kevin J. Gruenwald Several factors helped cause this particular accident. First, Reynolds was assigned as aircraft commander for the mission despite representing the least experienced B-1 pilot. Benefield, the most experienced B-1 pilot, was assigned as copilot. That led to communication problems because Reynolds instinctively deferred to Benefield's experience and assume Benefield was fulfilling his duties. Contrary to flight manual procedures, he did not verbally check that Benefield had reset the center-of-gravity controls before the bomber's wings were swept forward. For some unknown reason, Benefield did not fulfill his duty in resetting the controls; an action that would have prevented disaster. The bomber crew had also fallen into the habit of simply turning off caution lights and warning alarms that regularly went off during the flight tests. That "habit pattern transfer" meant that they simply turned off and ignored the automatic warnings triggered by the more serious center-of-gravity issue that eventually led to the bomber's destruction. When disaster did strike, the bomber crew spent precious seconds trying to regain control of the aircraft before ejecting. The B-1 bomber's loss of control began around an altitude of 4,000 feet, which was already below the 10,000 feet safety limit for ejecting. The crew only began the escape sequence after waiting almost half a minute, at an altitude of 1,500 feet. Another factor was the over-aggressive test sequence in going from wings swept all the way back to wings swept all the way forward, which left very little room for error in adjusting the center-of-gravity controls. And on the ground, the control room's mission controllers and engineers failed to monitor the bomber's center-of-gravity condition because they were huddled together in a brief meeting. The control room had relaxed its guard because the wing-sweep maneuver took place at a time between two designated "test points" in the flight, and they assumed it was a relatively low-risk phase of the flight. But as the history of aerospace disasters shows, the test flights of new aircraft are never without risk.