How to Read a Closed Book 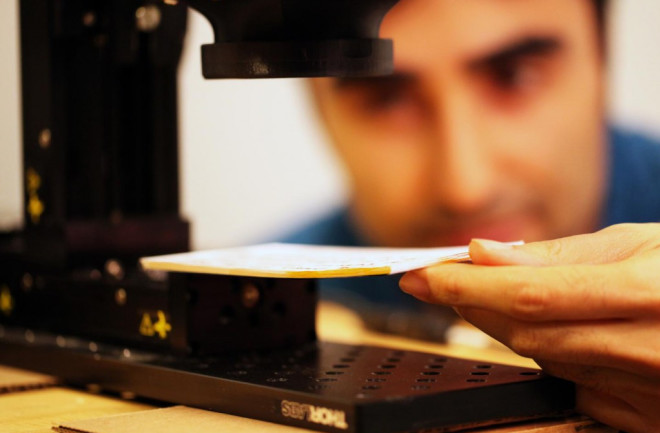 A researcher tests out the new terahertz imaging system. (Credit: Courtesy Barmak Heshmat) You still can’t judge a book by its cover, but it’s possible to read one without ever opening it. That certainly adds a new wrinkle to an age-old idiom. But it’s true; researchers at MIT and Georgia Tech built a prototype — key word prototype — imaging system that can read individual pages in a stack of papers. It’s an early demonstration, so we’re talking a stack of only nine pages, but it’s a start. And as the technology improves, it could someday give, say, museum curators, another tool to study ancient, fragile books they wouldn’t dare open.

To peer through stacks of paper, the system relies on terahertz radiation, which is a frequency band of electromagnetic radiation that falls between microwaves and infrared light. Terahertz imaging systems emit short bursts of radiation that can penetrate a variety of materials. Substances such as water, plastics, gases and biofuels absorb specific terahertz frequencies, which makes it easy to identify them. NASA used the technique to inspect foam insulation structures on its shuttle fleet, and it’s the same technology used in full body scanners at the airport. You know, those scans that produced quasi-pornographic images of airplane passengers.

Researchers used a standard terahertz camera to blast radiation at a stack of 20 papers with a single letter printed on each, and a sensor detected the reflected radiation. The paper and ink each absorb their signature frequencies, revealing the letters. There are also tiny pockets of air between each sheet of paper, and this boundary affects when of the reflected signal hits the sensor. The resulting images aren’t exactly pretty — the device’s electronics produce a background hum, and some of the radiation bounces between pages before returning to the sensor. So Georgia Tech and MIT designed algorithms that clean these images up and interpret each page’s contents. Those algorithms, which can decipher contents of tightly stacked pages, are the big improvement here. Researchers published details about their new technique Friday in the journal Nature Communications.

Peeking at documents without opening them isn’t a new trick. Using the European Synchrotron Radiation Facility, for example, researchers from France bombarded ancient Herculaneum scrolls with extremely high-intensity X-rays, in a process called scanning X-ray fluorescence. This caused the metallic inks inside to emit photons, and “light up.” Terahertz imaging has also been used to see inside an ancient Egyptian jar at the Museum of Aquitaine in France. Terahertz radiation revealed previously unknown, organic contents that X-rays wouldn’t have. So far, the system can penetrate and interpret the top nine pages in a stack of 20 — the signal looses energy the deeper it goes, resulting to too much noise. But as the relatively young technology improves, it’ll be able to dive deeper.