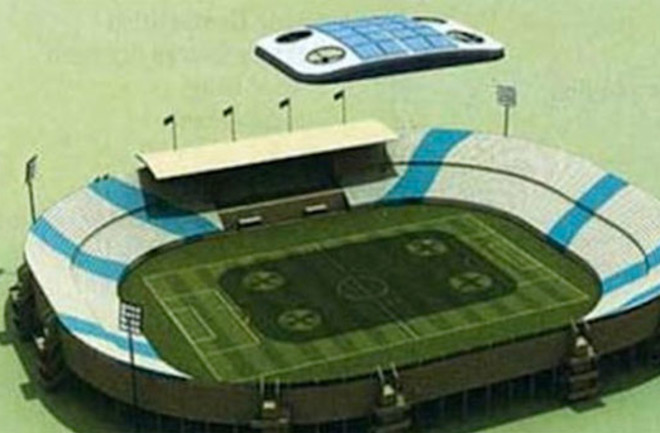 Picturing yourself at the 2022 World Cup, surrounded by Qatar’s (as-yet-to-be-built) state-of-the-art stadium sounds like a soccer-fan’s dream, but there’s one problem: In the summer, when the event is traditionally held, this desert country’s temperatures can easily top 115 degrees Fahrenheit. It’s hard to enjoy soccer when you’re suffering a heat stroke, which is why engineers are developing a flying-saucer-like carbon-fiber cloud that will float above soccer-eyed spectators and automatically reposition itself to block the sun, cooling them from the sizzling heat.

As Saud Ghani, head of Qatar University’s  Mechanical and Industrial Engineering group, told CNN, this giant iPhone-shaped robotic cloud could potentially drop temperatures by 10 degrees Fahrenheit. It does this by shielding the pitch from sunlight (a simple-enough concept). So how does it stay aloft, and stay in the right place to block the sun?

“Artificial clouds will move by remote control, [be] made of 100 percent light carbonic materials, fueled by four solar-powered engines and will fly high to protect direct and indirect sun rays to control temperatures at the open playgrounds,” Ghani said in a statement. Pockets filled with helium will allow the man-made cloud to rise in the air and stay elevated, while sensors track the sun’s transit, allowing it to reposition itself around the stadium to best shield thousands of spectators.

In the back of your mind, you might be wondering: Why not just move the match to a winter date? The reason is that the World Cup is a summer tradition and people don’t want to fiddle with it. “At this stage there are no concrete plans to change the international match calendar,” FIFA said in a statement.

So far, the carbon-cloud project has gone through preliminary engineering, and Ghani’s team plans on making a miniature prototype by 2012. The full-scale models will cost $500,000 a pop, and while they sound neat and all, are they really worth it if the crowd will still be sitting in 105-degree heat?