How the Religious See Robots 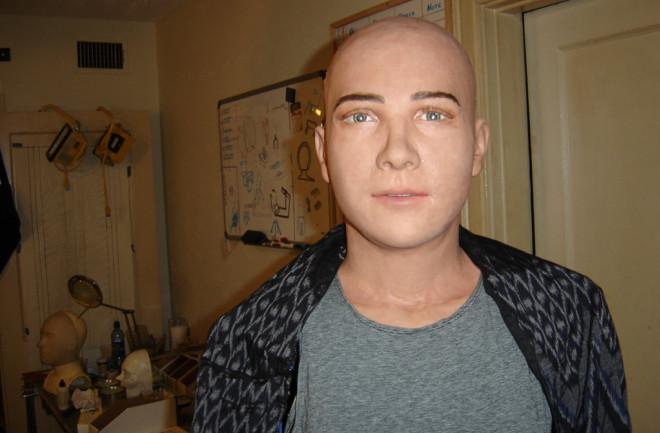 Participants in an Uncanny Valley study found the "Jules" android to be the creepist of a group of robots and androids. Credit: Hanson Robotics Catholic astronomers and even Pope Francis have talked about how the Catholic Church could theoretically welcome aliens from other planets into the religious fold. But believers of Catholicism and other world religions may sooner have to consider whether they would welcome human-like android robots working and living alongside humans. A new study suggests that potential future could prove particularly troubling in the minds of religious fundamentalists within major Abrahamic religions such as Christianity. Religious fundamentalism seems to have some influence on believers' attitudes toward humanoid robots, according to research by Karl MacDorman, an associate professor of human-computer interaction at Indiana University in Indianapolis, and Steven Entezari, a Ph.D. student at Indiana University. MacDorman and Entezari's study of almost 500 college students found that religious fundamentalists tend to view human-like robots as being more creepy overall. That sensitivity to robot creepiness refers to a proposed phenomenon called the "uncanny valley", first discussed by Japanese roboticist Masahiro Mori in a 1970 essay, that describes the feeling of eeriness or discomfort related to robots or other figures that appear almost human. MacDorman and Entezari propose that the uncanny valley phenomenon can consist of both culturally-conditioned feelings — such as Christian beliefs in humans being unique and set apart from robots and the rest of creation — and biologically-rooted feelings involving fear and disgust. They used that mindset to analyze their latest study that looked at the relationship between individual traits and sensitivity to the uncanny valley.

For the study's purposes, researchers defined uncanny valley sensitivity as higher ratings of eeriness and lower ratings of warmth for android robots. Eeriness referred to a feeling of creepiness related to seeing something particularly disturbing or disgusting. By comparison, warmth (versus coldness) referred to an individual's social perception of a robot or human. The study first surveyed participants on nine individual traits that they suspected of being linked to uncanny valley sensitivity. Some of the more interesting traits included religious fundamentalism and "animal reminder sensitivity" — a personal tendency to be disturbed by reminders of the mortal body or bodily functions. Next, the study asked participants to rate a series of six videos showing five robots and one human based on factors such as eeriness and warmth. The robots ranged from an iRobot Roomba vacuum cleaner to a series of human-like androids with non-human features such as open skulls with exposed wires, expressionless faces, mechanical body movements, and voices not synchronized with lip movements. (More details are available in the preprint copy of the paper that will appear in an upcoming 2015 issue of the journal Interaction Studies.) Five of the nine individual traits appeared to predict uncanny valley sensitivity by having strong correlations with eeriness ratings and inverse relationships with warmth ratings. But the effects of religious fundamentalism and animal reminder sensitivity in particular raise some intriguing questions for the future.

For instance, researchers were surprised to see that religious fundamentalism had a direct negative influence on eerie ratings, even if it didn't quite reach the level of statistical significance. One possible explanation is that a religious belief in salvation and eternal life might actually lead people to see robots as less of a creepy threat, except for the fact that the Christian worldview distinctly places humans above the rest of creation. Future studies could clarify the issue by comparing Christian fundamentalists with fundamentalists belonging to religions that put less emphasis on the difference between humans and non-humans. (Examples of such religions might include neo-Confucianism, Taoism, Buddhism and Shinto.) Religious fundamentalism increased eerie ratings overall through its indirect impact on individual attitudes toward robots, but had a stronger correlation with the warmth ratings. By comparison, animal reminder sensitivity directly increased eerie ratings and had less of a correlation with warmth ratings. Why the difference? MacDorman and Entezari point to the explanation of religious fundamentalism being a sociocultural influence, whereas animal reminder sensitivity represents an instinctive sense of fear and disgust — a biological adaptation for threat avoidance. In the end, the exploratory study raises more questions about the uncanny valley and leaves plenty unanswered. But the early findings do suggest that researchers could benefit from exploring the differences between various religions when it comes to the uncanny valley and robots. Making the distinction between culturally-conditioned beliefs versus biological adaptations could also lead to a better understanding of what the uncanny valley represents within the human experience. Update: I changed the wording of the lead paragraph to clarify that religious fundamentalism was not defined by the study as referring to Catholicism. The study focused on a Christian fundamentalist worldview typically found in certain Protestant groups, and also proposed a similar mindset might hold for fundamentalists within other Abrahamic religions.