How Smart Are You?

Bran Ferren's yellow plastic box is full of gadgets and gizmos. What you can figure out about them may be more revealing than any IQ test 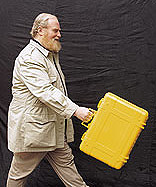 Applied Minds whiz Bran Ferren separates the can-dos from the wanna-dos by simply opening up his little yellow suitcase of contraptions and saying to a job applicant, “What do you suppose these are?”

So you want a job at Applied Minds. Who doesn’t? Every month about 20 of the nation’s most creative engineers and designers, including top graduates from Stanford University and MIT, apply for positions at this Glendale, California, design and invention firm. The client list ranges from trendy furniture-maker Herman Miller to General Motors, Northrop Grumman, and NASA. Story Musgrave, a six-shuttle-mission astronaut, works there. The cochairmen are Bran Ferren, former executive vice president for Walt Disney Imagineering, and Danny Hillis, whose insights underlie the operation of most supercomputers. The company vibe is geeky fun—there are cool robots, a secret doorway disguised as a phone booth, even free espresso.

But between you and the gig sits the box.

“I came up with the box because I found that there is almost no correlation between what people say in an interview and their ability to actually do stuff,” Ferren says. A résumé full of advanced degrees doesn’t help much, either. Ferren himself dropped out of MIT after one year to start a successful design and engineering firm, and he has found that many capable engineers are similarly unschooled. “The best folks are the ones who grow up with military surplus, who have been fiddling with things since they could walk.”

From the outside, the box doesn’t impress. It’s just a bright yellow waterproof plastic case. But inside sits an array of parts, gadgets, and whatsits representing the vast panoply of modern design and engineering. Cheap and expensive, homely and beautiful, accessible and abstruse, they gleam temptingly under the lights.

Ferren and Hillis have used the box to test job applicants hundreds of times, gradually honing it into a sophisticated tool. The applicant may not know it, but the moment the lid swings open, the examination has begun.

“I have actually had people who are afraid to touch things. They might be very smart, but they clearly have no experience handling objects,” says Hillis. Such abstract, ethereal types don’t flourish at Applied Minds. “We are a rapid prototyping shop. You think it up, then you go build it and make it work,” says Ferren.

So Applied Minds wants people who compulsively grab, manipulate, and even fondle the hardware. Sure enough, when I asked Russell Howe, a staff mathematician who had taken the test years ago, to try it again with a new batch of objects, he radiated something akin to joy as he plucked out one item after another, describing their functions in loving detail as he pulled, twisted, bent, and manipulated. “Russell grew up on a farm,” says Ferren, a qualification he deems as significant as Howe’s applied mathematics degree from Caltech.

Hillis emphasizes that the best applicant isn’t necessarily one who can name the most objects. “I like to hear how people think about things they can’t name, that they have never seen before,” he says. “How do they examine it? How do they imagine what such a thing might be used for? People can always acquire more knowledge, but we can’t give them a new thinking process.”

On the other hand, knowledge does count, says Ferren. “A serious engineer could pick up any object in the box and give you information about it for hours.” When I took the test, my explanations were literate, witty, even scintillating, but also generally wrong. Ferren did not offer me a job.

The contents of the box continually shift as Ferren, Hillis, and their friends add and discard objects that drift into their lives. Now there are about 50 items inside. Presented here are 11 of them, a representative sample. To compensate for the fact that you cannot handle the items, we’ve added size and weight information and a few hints.

So take your best shot. “We are always looking for engineers,” says Hillis. “Our aim is simply to hire the best people in the world.” If you knock this one out of the park and enjoy the process, contact the company, as you are almost sure to like working there. “In a sense,” says Hillis, “the company is like a giant version of this box.” 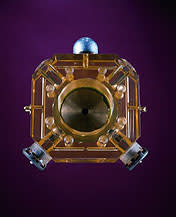 “This is typically used in missile guidance, aircraft navigation, or similar applications,” says Ferren. “Two beams are generated by its internal laser. One travels clockwise and the other counterclockwise in a rectangular ‘ring’ made by precision mirrors.” If the gyro rotates slightly—because, say, the missile veers to the right—that creates a change in the interference pattern where the two beams pass because of the minute difference in arrival time caused by the rotation. Analyzing that pattern reveals the rate of rotation, and that reveals the correction needed to get the missile back on course. Ferren concedes it’s an uncommon item, and even a seasoned engineer may have never seen one. “But any engineer should see that it is a precision optical assembly,” he says. “It’s clearly made of low-temperature-coefficient optical material. It has narrowband reflectors, which you can see because their colors change when you view them at different angles.” A really sharp candidate, Ferren says, would know that this gyro is roughly 20 years old. Today’s advanced optical gyroscopes use fiber optics and look considerably different.

What is 1 pound, 2 3/8 inches long, 2 inches in diameter, and includes the engravings HANSEN COUPLING DIV., CLEVELAND, OHIO, USA, and SERIES 4 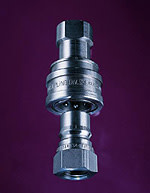 The first test with this item is whether the applicant uncouples it by pulling back on the locking ring. While identifying this should be fairly easy, Ferren might use it to start a dialogue about hydraulics or fluid mechanics. He might ask how much pressure this coupling could probably take (6,000 pounds per square inch), how much it probably sells for ($300), and what would happen if it were decoupled under pressure (nothing—this one is double self-sealing, so both ends close when it is pulled apart). 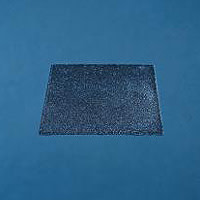 It doesn’t sparkle, but it really is a very pure synthetic diamond, grown in a laboratory. “It has high electrical resistance so that things don’t short out when it’s used as a circuitry substrate, and it has extraordinarily high thermal conductivity, much better than silver or gold,” says Ferren. It also has a low thermal coefficient of expansion and is very chemically resistant. “An integrated circuit could be built into its surface or laminated on top of it. Synthetic diamond is an emerging exotic material, very useful for many systems in which you need to remove heat.” 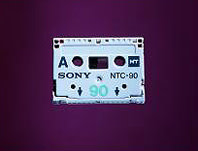 Obviously, it is a recording tape, but a very small one. Specifically, it’s a tape for the Sony Scoopman, officially known as the NT-1 digital micro recorder, introduced in 1991 and since discontinued. “It existed only for a brief moment in time, but I would expect a person to notice that it looks like a miniaturized videotape,” says Ferren. A savvy candidate would further comment that it is most likely intended for a helical-scan device (in which the bail is lifted, and the tape is pulled out and wrapped around a tilted, spinning head) and probably records only digital audio because such a small tape is unlikely to hold enough information to encode video.

What weighs 1 1/8 ounces, is 2 inches by 2 inches by 1 inch, and is a sample of something that comes in many odd sizes? 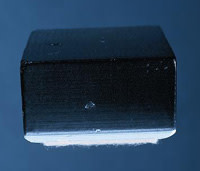 “A real space shuttle tile is larger and has serial numbers on it,” says Ferren. “Someone who is really bright might say, ‘Gee, this looks like a shuttle tile, but it’s too small to be a real one.’” Hillis will never forget when astronaut Story Musgrave, now an Applied Minds employee, plucked this from the box. “He not only explained what it was, he went into how it was made, and that launched him into a discussion of various other materials used on the shuttle.” Such an exposition is not uncommon, Hillis says: “Fairly often, an applicant tells me something about these objects that I did not know.” For example, 90 percent of a shuttle tile’s volume is empty space; only 10 percent is silica.

What is less than 1/20 of an ounce, 2 inches by 3/32 inch, and has translucent sides and ends that are clear and smooth?

The full name is erbium-doped yttrium-aluminum-garnet laser rod, which Ferren is willing to concede makes a mouthful for anyone without a degree in optics or physics. Nonetheless, even an engineer who doesn’t know much about light should recognize this as some type of common laser rod. Those with more knowledge of optics might point out that this “Er:YAG” crystal is used in solid-state lasers and be able to point out that a rod of this size could be found in a handheld device such as a military range finder.

What is 1 3/8 ounces, 2 inches across when coiled, unfurls to a length of 24 inches, and can be connected to an electrical device? 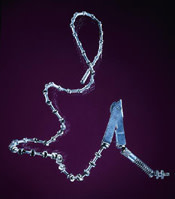