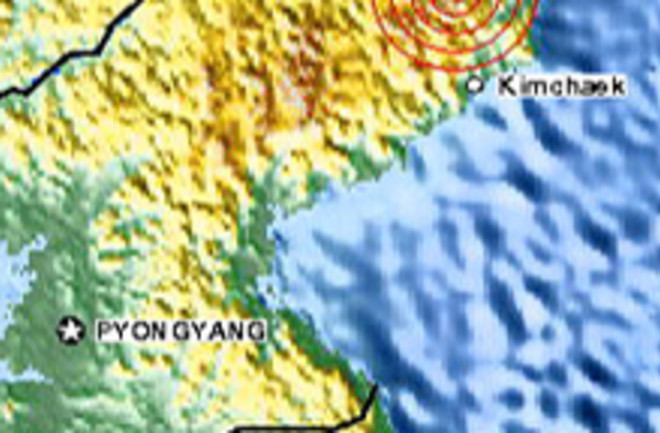 Even before North Korea announced that it had conducted its second underground test of a nuclear weapon, scientists around the world were putting together a picture of what had happened. With a combination of seismic and radiation monitoring, scientists expect to soon have a working idea of how far the rogue nation’s nuclear program has advanced.

At 9:55 a.m. local time on Monday, two seismic monitoring stations on the Japanese coast detected seismic waves coming from the area where North Korea last tested a nuclear weapon, in 2006. The region has little natural seismic activity, and experts noted that the waves didn’t match patterns produced by earthquakes. Movements along natural fault lines transmit most of their energy through ‘s-waves’, whereas explosions at a single point release a greater proportion through compressional p-waves. In the waves detected in Japan, the s-wave component was just one-fifth that of the p-wave. “You can’t say it’s impossible for a natural earthquake, but it would be very rare,” says Gen Aoki of the Japan Meteorological Agency in Tokyo [Nature News].

Experts note that the network of blast detectors intended for the Comprehensive Test Ban Treaty, which has not yet come into force, seems to have perfectly identified the explosion as a nuclear test, despite its small size. [In 1998, the U.S. Senate] rejected the CTBT partly over fears that countries could cheat, by claiming small covert weapons tests were earthquakes. The detection of the North Korean test raises hopes that the Senate will no longer be able to object [New Scientist]. But scientists had to do more than simply show that an underground explosion had sent ripples through the earth; they also have to determine how big the bomb was, and prove that the tremors weren’t caused by conventional explosives.

The U.S. Geological Survey reported that the seismic event had a magnitude of 4.7. While calculating the power of an underground blast from its resulting shockwaves requires knowledge of the region’s geology, in this case researchers benefited from previous studies done in 2006, when North Korea detonated its first nuclear bomb at the same site. That 2006 test was believed to be a “fizzle” in which the nuclear device didn’t create a self-sustaining chain reaction, and was judged to have a blast equivalent to 600 tons of TNT, or .6 kilotons.

Comparing seismic data from 2006 and the new explosion have led experts to estimate that Monday’s test had a blast equivalent to around 4 kilotons. While that’s considerably more powerful than the 2006 test, experts note that it’s still well below the power of bombs tested by other nations like India and Pakistan, and also well below the power of the bomb dropped on Hiroshima in 1945, which had an explosive yields of 15 kilotons. “Was it another fizzle?” asked Hans M. Kristensen, a nuclear expert at the Federation of American Scientists. “We’ll have to wait for more analysis of the seismic data, but so far the early news media reports about a ‘Hiroshima-size’ nuclear explosion seem to be overblown” [The New York Times].

Seismologist Paul Richards also says it’s unlikely that the blast came from conventional explosives. “To me, a chemical explosion on the order of a few thousand tonnes, with all the stuff detonated at all the same instant, is not a credible scenario,” he says [Nature News]. To confirm this assessment, experts will look for traces of radiation drifting from the site; in particular, they’ll scout for radioactive xenon isotopes in ratios that are distinct from those released by other sources, such as nuclear power stations [Nature News]. The U.S. Air Force may have already launched an aircraft with specialized “sniffer” devices that can detect radiation carried on the wind, and ground-based radionuclide monitoring stations in Japan and Russia may have their first results in a matter of days.