Whether it’s disinfecting, throat swabbing or even keeping patients company, robots could one day arrive at a hospital near you. 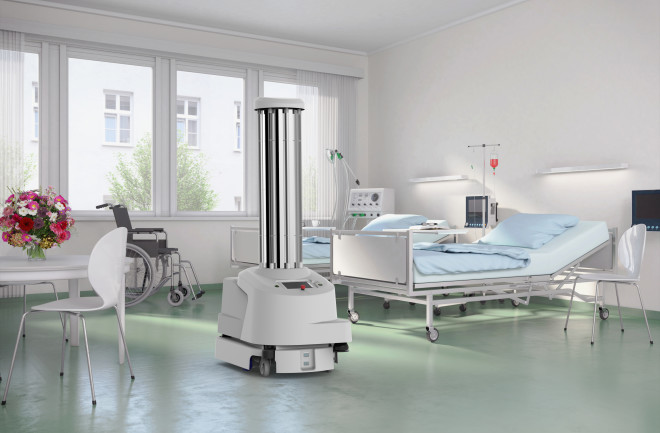 As health care workers, grocery store employees and delivery truck drivers repeatedly expose themselves to COVID-19, one thing has become clear to engineers: Robots could be handling some of these dangerous tasks.

In an editorial in Science Robotics, researchers argue that many essential but risky jobs could be performed by robots during health emergencies. Some early technologies already manage a few of these tasks, like sanitizing surfaces, the 13 scientists write. But, for the most part, technological substitutes for jobs like contaminated waste handling or patient throat swabbing still need financial and institutional backing to get up and running.

“Clearly robots are here for taking some of those risks away from people,” said Guang-Zhong Yang, roboticist with Shanghai Jiao Tong University in China and co-author of the editorial, on a press call this week. Whether robotics researchers can sustain funding and interest long enough to get those devices ready for the next global health emergency remains to be seen.

When it comes to some of the jobs that deal directly with infectious agents or sick individuals, robots seem like a natural choice. One disinfecting technology, such as a robot that sanitizes with UV light, is already cruising through hospital hallways in China and parts of Europe. Other robots that sanitize at larger or smaller scales could be useful, too, the authors write. It might also be worth investigating how to swap health care workers for robots when it comes to swabbing throats for disease.

There are some less obvious uses for robots during health emergencies, too. Isolation for those in quarantine can come with emotional and mental burdens. Social robots could fill some of that void while maintaining distance between humans — something that will take serious advancements in emotional and contextual decision-making technology. Robots could even take on a larger role in the video conferencing tech that most of us have turned to as we work from home. Virtual reality could serve to make digital meetings more immersive for those chiming in from far away, the authors write.

To work at scale, though, these technologies would have to be affordable as well as respectful of privacy. “When we deploy robots for some of the functions to be autonomous,” Yang said, “how do we make sure that those autonomous robots will observe social protocols?”

To ensure that these technologies come to life, Yang and other experts are considering starting a recurring global competition. Teams could test robots designed for the challenges of infectious disease management to see if the technology is viable and how quickly it could be developed, Yang said.

Maybe these ambitions will stave off the apathy that typically sets in once current bouts of panic — like this pandemic — are over, Yang said. “The issue here is every time there is an outbreak, we realize how important it is for the use of robots for a situation like this,” he said. “After the event, this kind of a drive seems to be waning. And when the next thing happens again, you get caught.”