How Radio Changed Everything

Three revolutions have come via the airwaves. 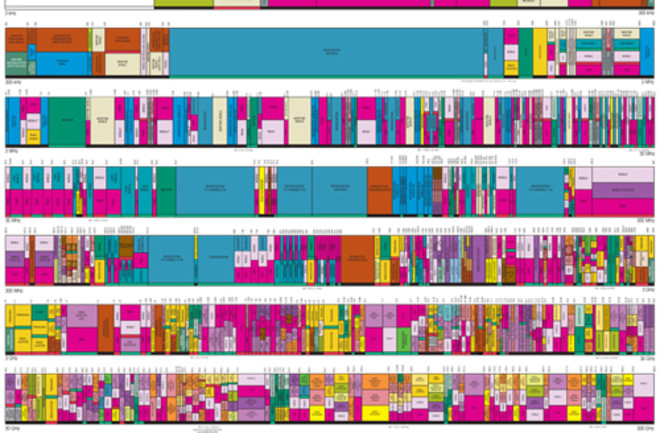 Frequency allocation in the U.S. (Credit: Courtesy of the National Telecommunications and Information Administration)

Radio has transformed society three times, not to mention giving birth to the entire field of electronics. Perhaps no invention of modern times has delivered so much while initially promising so little. When radio arrived at the end of the 19th century, few thought that “wireless” communications, in which intangible signals could be sent through the air over long distances, would be competitive in a world dominated by the telegraph and telephone. The early inventors studied the work of Scottish physicist James Clerk Maxwell, who had formulated a set of equations — “Maxwell’s equations” — that expressed the basic laws of electricity and magnetism, but as a purely theoretical exercise in understanding how nature works. His equations explained light as one form of electromagnetic radiation and predicted that there should be many other forms, invisible to the human eye. In the 1880s the German physicist Heinrich Rudolf Hertz validated Maxwell’s laws by detecting radio waves — fundamentally similar to light but with wavelengths a million times longer. “Maestro Maxwell was right,” Hertz said, but he concluded that the existence of these other waves was “of no use whatsoever.”

Fortunately, other scientists and engineers saw the radio spectrum not as a curiosity but as a tool for a new kind of communication. The principle behind radio transmission is simple. Electrons moving through a wire create a magnetic field. Place another wire near the first and electrons will start to move in the second wire too. The signal travels between the wires because the magnetic field formed by the first wire — the transmitter — creates an electric field in space, which in turn creates a magnetic field, and so on, moving outward at the speed of light. When the second wire — the receiver — picks up that signal, the field is converted back into the motion of electrons, detectable as an electric current. In order to carry information, the transmitted signal has to vary over time. The easiest way to do this is simply to stop and start the current in the first wire, sending a message as a series of pulses. The flamboyant Serbian-born engineer Nikola Tesla followed that approach and transmitted a radio signal across a short distance in 1893. Soon after, Italian inventor Guglielmo Marconi accidentally discovered that grounded antennas could send signals more than a mile instead of a few hundred yards. He had inadvertently been using Earth to propagate a radio signal close to the ground. With further refinements, he found a way for ships to talk to each other using Morse code — the quintessential pulsed signal — and in 1896, just 21, he traveled to England and set up a radio company, British Marconi.

World events quickly proved the value of this work. In 1905 the Japanese navy all but destroyed the Russian fleet at the Battle of Tsushima, in part because of radio equipment the Japanese bought from Marconi. And in 1912, after ships responding to the sinking Titanic’s distress signals rescued 711 passengers, maritime authorities required every seagoing vessel to have a wireless operator listening around the clock. But Marconi’s vision proved limited. He saw the airwaves as useful for point-to-point traffic between ships at sea and other clients untethered by cables, but that was about it. Marconi “took radio to the marketplace, but he never had the idea of broadcasting,” says Susan J. Douglas, a radio historian at the University of Michigan.

The next big step was finding a way to manipulate radio waves so they could carry more than dots and dashes. Switching from pulses to continuous waves provided the key. Reginald Fessenden, a Canadian auto­didact, invented a way to transmit voice and music by altering the intensity of waves — called amplitude modulation — thus creating AM radio. (Amplitude modulation superimposes a varying audio wave onto a radio wave with a fixed frequency: Where the audio wave peaks, the modulated radio wave is at its highest intensity, and where the audio wave has a trough, the radio wave is at its lowest intensity.)

Fessenden ultimately earned money and fame from his invention. On the other hand, American radio engineer Edwin Howard Armstrong, regarded by many radio cognoscenti as the greatest of them all, is today almost forgotten. He noticed that by varying wave frequency instead of amplitude, stations could avoid the interference that often corrupted AM transmissions. The result was frequency modulation — FM radio. (In this case, a peak in the audio wave is represented by an increase in the frequency of the radio wave, while a trough is represented as a decrease in frequency.) A lifetime of patent lawsuits crushed Armstrong emotionally, and he committed suicide in 1954.

Although its commercial potential today seems obvious, broadcasting was actually kick-started by amateurs: “By the 19-teens, ham radio operators were everywhere,” Douglas says. The hams — a term coined as a slur by professional telegraph operators — “were sending homework and football scores and news in Morse code, and then they went to World War I and found out about vacuum tubes.” Thanks to the amplifying power of the newly invented vacuum tubes, hams started sending audio everywhere. “You could just set up a transmitter and start broadcasting stuff,” says radio industry consultant Rick Ducey, formerly the head of research for the National Association of Broadcasters. “That’s all it took.”

Westinghouse engineer Frank Conrad generally gets credit for transmitting the first regular AM broadcasts in the United States from his East Pittsburgh garage (although stations in San Jose, Detroit, and elsewhere were also active). His show aired every Wednesday and Saturday — some sports scores, some talk, but mostly music. When Conrad ran out of records, he struck a deal with a local store to supply him with more in return for on-air promotions. These are believed to be the first radio ads. But by the mid-1920s, so many people were doing it, the industry “needed a traffic cop,” Ducey says.

To bring some order to the growing number of broadcasters who were appropriating their own radio wavelengths, or frequencies, the government created the Federal Radio Commission. That agency, later re-formed as the Federal Communications Commission (today’s FCC), assigned specific frequency bands to different users. In 1920 Conrad applied for and received a license from the Commerce Department for radio station KDKA. Radio broadcast licensing was born, and a virtual real estate boom — the competition for slices of the radio band — began. The amateurs who stayed amateurs soon found themselves being moved by regulators to less desirable locations farther up the radio spectrum. Roughly speaking, lower frequencies are cheaper to use than higher frequencies because they require less precise equipment, an important consideration for an industry that wanted to market radio receivers to the masses.

Soon the armed forces also wanted their slice of the radio spectrum. Military use of radio communications may have begun at Tsushima, but after World War I it expanded enormously. Governments started to understand radio’s immense potential, not only for communications but also as a weapon: radio detecting and ranging, better known as radar.

Radar began with the observation that lightning gives off a radio signal, and Scottish engineer Robert Watson-Watt, working as a meteorologist, thought he could exploit this phenomenon to warn pilots of approaching storms. Using a directional antenna, he found he could scan the skies and pick up lightning. Then he realized that if he transmitted radio pulses as well as listened to them, he could bounce a signal off a target — an approaching aircraft, for example. By measuring how long it took for echoes to return to the antenna, he could know not only the bearing of the target but also its range.

Watson-Watt promptly contacted the British Air Ministry in 1935. After some initial skepticism, the ministry embraced the invention. As World War II began, 19 radar stations were in operation. “It came online just in time, and it gave Britain a terrific edge,” says George Washington University radio expert Christopher Sterling. “Many argue that radar won the Battle of Britain.” Because you have to use a radio wavelength that is smaller than the dimensions of the object you are trying to locate, radar relies on high-frequency waves, just a few inches long (higher frequencies have shorter wavelengths). FM signals, in contrast, have a wavelength of about 10 feet, and AM signals run about 1,000 feet.

The first decades of the 20th century also saw video being transmitted over the airwaves. The first television system, developed in the U.K. in the early 1920s by John Logie Baird, used an electromechanical device akin to a film camera and projector to capture and reproduce images. He started broadcasting TV using just 30 scan lines per video frame — enough to send a rough image but crude compared with the 484 lines per frame used in U.S. analog TV broadcasts and the 1,080 lines possible with new digital systems. Several thousand Londoners were watching Baird’s television programs by the late 1930s, but the system was shut down when World War II started — German bombers could have used Baird’s transmission as a homing signal. The televisions in use today trace their heritage to American inventor Philo Farnsworth, who created the first all-electronic television system in 1928.

Over the years, more users have elbowed their way onto the radio spectrum as new technologies arrive. Some need ultrahigh frequencies that allow more information to be transmitted per second. It is no surprise to find a data networking technology like Wi-Fi operating at 2.4 gigahertz. AM and FM have been joined by many other modulation schemes with exotic names like “quadrature phase-shift keying” and “double-sideband suppressed-carrier transmission.”

Today the picture of the radio spectrum is a color-coded colossus composed of hundreds of bands allotted by the FCC from frequencies as low as 6 kilohertz to as high as 300 gigahertz. Very low frequencies ­ —from 3 to 30 Hz, with wavelengths tens of thousands of miles long — are used to penetrate the oceans and communicate with submarines. Baby monitors operate at 49 megahertz. FM radio is positioned between 88 MHz and 108 MHz, and users as diverse as police dispatchers, air traffic controllers, and cell phone callers all have their own bands. At the upper end of the radio spectrum come microwaves, used for data transmission, radar, and of course, cooking. In what was probably the most unexpected application of Maxwell’s laws, the development of the microwave oven was sparked in 1945 when Percy Spencer, an engineer building radars, noticed that the peanut bar in his pocket had melted after he worked on some active equipment. (Scary thought: Your microwave operates at almost the exact same frequency as your Wi-Fi connection.)

Engineers keep finding more and more uses for radio, and frequencies never seem to end up on the scrap heap. You can even find Morse code transmissions still on the air. In 2009 analog broadcast TV will stop in the United States — but bidders are already lined up, preparing extravagant new uses for those slices of spectrum. “It’s marvelous,” Ducey says. “If you stop to think about it, it’s almost magic.”