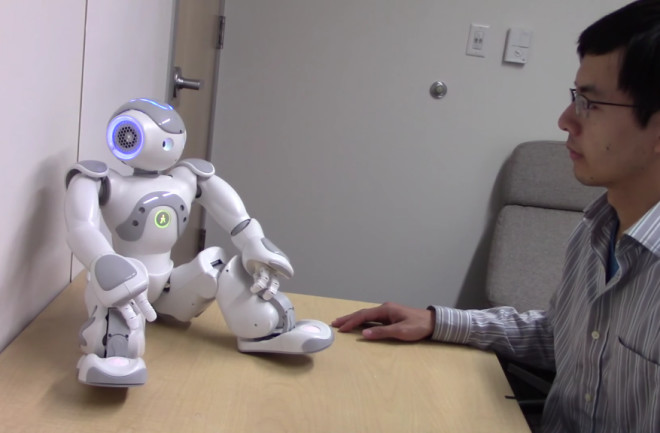 A study participant and the Nao robot used in the study. (Credit: Jamy Li/Stanford) Touching a robot's "intimate areas" can be arousing, researchers from Stanford say. Jamy Li, a doctoral student at Stanford University asked 10 people to follow a robot's commands as it asked them to touch 13 different parts of its body, including its hand, ear and buttocks. Li found that participants showed definite signs of arousal when asked to touch "areas of low accessibility" — a scientific way of saying "butt." Scientists have examined the ways we appraise a robot's appearance and the words it uses, but Li wanted to examine an under appreciated facet of robot-human interactions: touch.

A sensor on participants non-dominant hand measured skin conductance and reaction times in Li's small study. Skin conductance is often used as an empirical measure of arousal, detecting changes in electrical conductivity as the body produces sweat in response to exciting stimuli.Touching intimate areas on a robot caused participants to sweat more, a sign of excitement or arousal. Li also noted an increase in reaction times when participants touched intimate areas, likely a sign that they felt slightly uncomfortable doing so. Pointing to the same areas failed to elicit a response, indicating that it was the physical act of reaching out and touching that prompted the feelings of arousal.And it wasn't just the buttocks either — other off-limits parts of our bodies, like the eyes, also prompted a heightened response. Li's research will be presented at a conference of the International Communications Association in Japan in June.

Beyond proving that touching a robot's "private parts" is awkward, Li says his research sheds light on an underrated aspect of daily interactions with technology. From touch screens to driverless cars, our technology is getting a lot more hands on. While we may not feel odd about touching a phone, when machines have human characteristics, a social dimension is added to our physical interactions. "Touch being a powerful way to interact, it seems that it’s the same way with the robot, perhaps more so than touching a computer screen or other forms of technology," says Li. Giving robots the ability to interact with humans in emotionally resonant ways has applications beyond just sex robots. It could help inform the entire range of our relationships with machines. "Touching is important in interpersonal attraction, it’s a more intimate way to interact with people," says Li. "So, for robots that are appearing in public spaces, and maybe eventually in people's homes, how will people respond to being able to touch those robots?"

The robot Li used is called Nao, and while it has some anthropomorphic features, it is still obviously un-human — far removed from the uncanny valley. The lack of noticeable human sexual traits leaves open the question of whether participants in Li's study were actually turned on by the robot, or if their arousal was an ingrained behavior tied to the idea of touching areas with "low accessibility." The concept of sex robots has been around for some time, and has stirred both interest and criticism. In fact, the makers of Nao, Aldebaran Robotics, has even issued a warning to customers regarding one of its other models, Pepper. The company states in the user contract that Pepper cannot be used for "sexual or indecent behavior," according to Wired. Having sexual relations with a robot may not catch on for a while, if ever. A recent study found that two thirds of men but only one third of women would try out a sex robot, with even lower levels of approval for robots that looked like animals and celebrities.