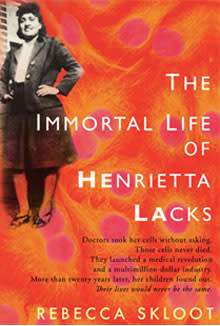 You may have learned of the line of cells known as the HeLa strain in a biology class, where a teacher explained the "virtually immortal" nature of these rapidly multiplying cells, and how they played a defining role in science. Over the last six decades, the prolific HeLa cells have been used to develop the first polio vaccines, test chemotherapy drugs, and develop techniques for in vitro fertilization. With their amazing capacity to multiply, the cells are an endless bounty to scientists.

HeLa has helped build thousands of careers, not to mention more than 60,000 scientific studies, with nearly 10 more being published every day, revealing the secrets of everything from aging and cancer to mosquito mating and the cellular effects of working in sewers [The New York Times].

But for all that research, little was known about the origin of the cells or about the unwitting donor who supplied them--Henrietta Lacks (The "He" in HeLa stands for Henrietta and "La," for Lacks). Lacks was a 30-year old black tobacco worker who died of cervical cancer nearly 60 years ago. She died in a public ward for "coloreds" at the then-segregated Johns Hopkins hospital in Baltimore.

In a new book, The Immortal Life of Henrietta Lacks, author Rebecca Skloot explores Henrietta Lacks's impoverished background and raises troubling ethical questions. She notes that Lacks's cells are still used to this day, but the family never received a penny and was largely unaware of the fate of the cells.

Over the course of 10 years, Skloot worked with Lacks's daughter Deborah to uncover the real story behind the HeLa cells.

Henrietta had no idea when she died that her tissue was being used for research, still less that it had such miraculous properties; indeed, only in 1973 was she publicly confirmed as the source of the wonder-cells [The Independent].

Bu the cells taken from her cancerous cervix were special: Unlike the human cells that researchers had worked with until then, HeLa cells divided easily and multiplied rapidly, meaning that the self-perpetuating cells essentially became immortal. Since then, thousands of scientists have used Lacks's cells for research and some biotech companies have reportedly made millions of dollars off them, raising important questions about tissue culture.

In the 1980s a doctor who had removed the cancer-ridden spleen of a man named John Moore patented some of the cells to create a cell line then valued at more than $3 billion, without Moore’s knowledge. Moore sued, and on appeal the court ruled that patients had the right to control their tissues, but soon that was struck down by the California Supreme Court, which said that tissue removed from the body had been abandoned as medical waste. The cell line created by the doctor had been “transformed” via his “inventive effort,” and to say otherwise would “destroy the economic incentive to conduct important medical research” [The New York Times].

In Henrietta's case, however, the ethical dilemma wasn't just about using tissue without consent; it also brings to mind the shameful history of using African Americans for medical research.

During slavery, doctors tested drugs and operated on black people to develop new treatments and surgical techniques. In the 1900s, black corpses were routinely exhumed and shipped to medical schools for research. Black men died unnecessary deaths in Alabama so scientists could study the effects of their untreated disease in the Tuskegee Syphilis Study [The Chicago Tribune].

book has been described as a thriller combined with Erin Brockovich, but ultimately it pays tribute to the incredible life and death of an unknown African-American woman, and throws light

[The New York Times]. Henrietta Lacks was not just a collection of cells. She was a walnut-eyed, square-jawed beauty who favored polished red fingernails and toenails. And sadly, she lived a hard, short life [The Chicago Tribune].

DISCOVER: No Longer Human The Intersection: The Immortal Life of Henrietta Lacks

The Loom: Henrietta Lacks and the Future of Science Books