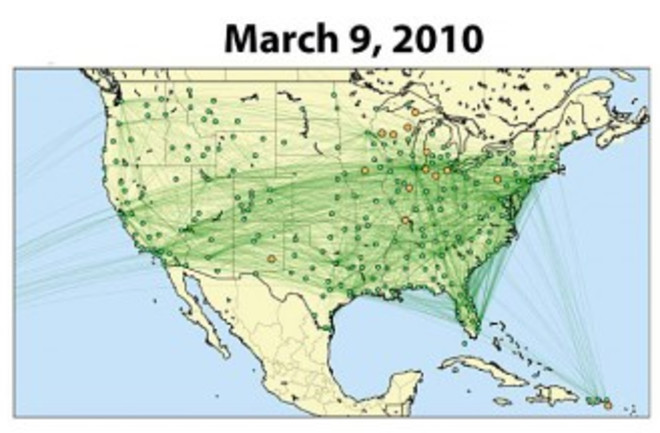 Real data for three days in 2010, with, from L to R, low, intermediate, and high levels of congestion. Orange and red are congested airports; green airports are not congested. Links connecting airports in the largest cluster of delays are in red. If you've ever been stuck in an airport for hours on end, you know that explanations for such delays are often lacking. A new study of U.S. air traffic helps explain why minor delays spread through the system, and how to prevent them from doing so. Researchers began with 2010 data from more than 6 million U.S. domestic flights, including their scheduled and actual times of departure and arrival. They were especially interested in how minor delays at a few random airports produced further delays across other parts of the network---i.e., not so much what might happen if a massive storm closed many regional airports, but what might happen if a random scattering of planes across the country each needed 10 extra minutes on the ground to fix mechanical problems. To investigate, researchers produced a computer model, similar to ones used in the past to predict how infectious diseases are carried by air travel. As they report in arXiv this week, this model successfully reproduced actual 2010 flight records to the hour using just three inputs: aircraft rotation (a plane carrying one delayed flight will then delay its subsequent flight); flight connectivity (passengers and crew on one delayed flight will delay connecting flights) and airport congestion (an airport can accommodate a limited number of flights per hour).  Of those three factors, adding more airport capacity did very little to ease the congestion. Improved scheduling helped with aircraft rotation and connections; since the model can assess the resilience of a day's schedule in advance, this type of testing should maybe become standard in the future. But the variable with greatest power to spread delays was flight connections by crew and passengers (assuming the next plane waits for delayed passengers). The only remedy for that, it might seem, is Segways for all.