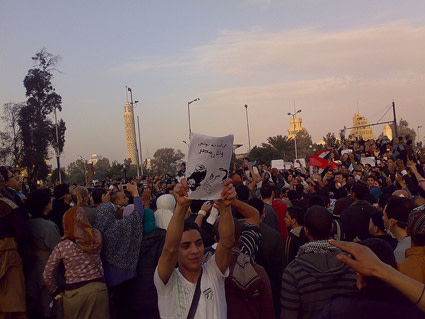 Supplies are dwindling, journalists are being arrested, and protests continue in Egypt today, with a mass demonstration planned for tomorrow. And still, the nation is Internet silent—almost. We remarked on Friday about this historic act of government internet censorship, but just how did the Egyptian government manage to shut down nearly all Internet communication coming out of the country? It wasn't a "kill switch," experts say—the Egyptian government didn't push a button and take down the country's Internet service providers. Rather, Egyptian ISPs all must have licenses with the state and follow the government's regulations, however draconian they may be. So if the Telecommunication Regulatory Authority called and told them to shut down, they didn't have much choice.

That comports with the data published by Renesys, a net monitoring firm, which saw individual ISPs go dark within minutes of one another. “First impressions: this sequencing looks like people getting phone calls, one at a time, telling them to take themselves off the air,” wrote Renesys’s chief scientist James Cowie. “Not an automated system that takes all providers down at once; instead, the incumbent leads and other providers follow meekly one by one until Egypt is silenced.” [Wired]

The fact that so much censorship happened so quickly is a result of the relative simplicity of Egypt's Internet, Cowie said in an interview with Scientific American

"If you look at a complex system such as those in the United States or Canada, you might ask, 'How many phone calls would I have to make to shut it down?' It probably wouldn't be possible. Most of the people you would call operate independent of the government and wouldn't even listen to you. In a place like Egypt there's a lot less diversity in that ecosystem. There were just a few key providers, they're all licensed by the government." [Scientific American]

As Egyptian ISPs have remained offline (with the exception of the Noor network, which the country uses for its stock market and government functions), Egyptians are turning to older technologies to get around the Web blackout

Dial-up modems are one of the most popular routes for Egyptians to get back online. Long lists of international numbers that connect to dial-up modems are circulating in Egypt thanks to net activists We Re-Build, Telecomix and others. Dial-up numbers featured heavily in Twitter messages tagged with hashes related to the protests such as #egypt and #jan25. [BBC News]

There are other creative ways for the 80 million Egyptians to connect to the world.

There are more options like SailMail: “The SailMail Association is a non-profit association of yacht owners that operates and maintains an email communications system for use by its members. SailMail email can be transferred via SailMail's own world-wide network of SSB-Pactor radio stations, or via satellite (Iridium, Inmarsat, Globalstar, Thuraya) or any other method of internet access (cellular networks, WiFi).” [International Business Times]

And there are more blasts from the recent past: Egyptian protesters and their sympathizers abroad reportedly are using fax machines to pass on information about how to circumvent the censorship, as well as sending messages through ham radio. Related Content: 80beats: Blackout: Egyptian Internet Taken Offline by Government Crackdown