How Drones Are Being Used In Zanzibar's Fight Against Malaria 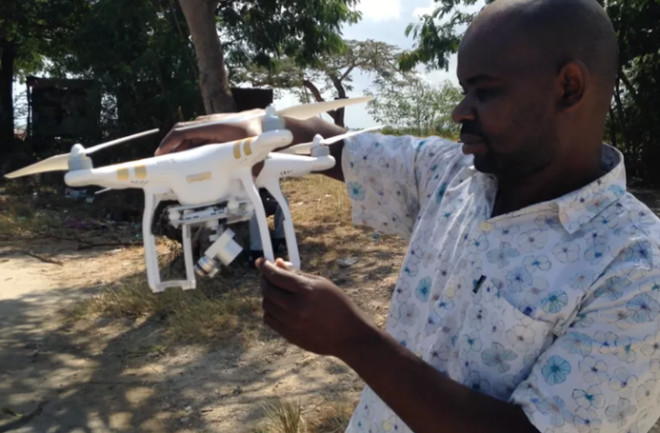 Makame Makame from the Zanzibar Malaria Elimination Programme holds one of the drones used to map malaria vectors. (Credit: Andy Hardy) On a typically hot and humid July day in Stonetown, the capital of Zanzibar, a gaggle of children, teenagers and the odd parents watched our small drone take flight. My colleagues Makame Makame, Khamis Haji and I had finally found the perfect launch spot. With a high-pitched humming, the drone took to the air. It sounded like a big mosquito—appropriate, since we were testing the use of drones for mapping aquatic malaria habitats. These shallow sunlit water bodies teem with mosquito larvae. In a matter of days, the larvae will emerge as adult mosquitoes in search of a blood meal. If one of those mosquitoes bites a human infected with malaria, it will become a vector for the disease and continue its deadly transmission cycle. Zanzibar is a Tanzanian archipelago off the coast of East Africa. Both it and mainland Tanzania have fought a long, well documented battle with malaria. Globally, the disease infects over 200 million people annually and is responsible for killing approximately 500,000 people each year. The Millennium Development Goals prompted a number of large scale campaigns across sub-Saharan Africa to combat malaria. Millions of bed nets were distributed. Insecticide was supplied to spray in homes across communities. The aim was to stop people getting bitten, interrupting the transmission cycle. It’s been a real success story, leading to a notable decrease in the disease’s prevalence. Some areas of Zanzibar have seen prevalence levels drop from 40 percent of the population having malaria to less than 1 percent. Now epidemiologists and public health managers are looking to complement indoor-based nets and spraying with outdoor based solutions. In effect, they’re taking the battle to mosquitoes. And drones are a crucial part of their armory. One of the main challenges to disease managers is finding small water bodies that mosquitoes use to breed. This is where drones come in—for the first time, drone imagery can be captured over large areas which can be used to create precise and accurate maps of potential habitats.

We know that once an adult mosquito has fed and rested, it will typically go in search of a mate. Then it moves on to a suitable location—an aquatic habitat like the fringes of river channels, roadside culverts and irrigated rice paddies—to lay its eggs. Public health authorities need to be able to locate and map these water bodies so they can be treated using a larvicide like DDT. This process is known as larval source management, and was successfully used in Brazil and Italy many decades ago. There, the DDT killed mosquito larvae—but could also be devastating for local ecology as well as having adverse effects on human health. Today much safer, low toxicity replacements have been developed. The problem is that they come at a cost. Resources are also needed to disseminate the larvicide and to locate the water bodies that host the mosquito eggs and larvae. Some of these hideaways are tough to find on foot, and if water bodies aren't accurately mapped a larvicide campaign could end up being a waste of time. My institution, Aberystwyth University in Wales, is working with the Zanzibar Malaria Elimination Programme to fly drones over known malaria hot spots.

A rice paddy in Mwera, Zanzibar, captured with a DJI Phantom 3 drone. These and other watery sites are perfect spots for mosquitoes to lay their eggs. (Credit: Andy Hardy) In 20 minutes, a single drone is able to survey a 30 hectare (74 acre) rice paddy. This imagery can be processed and analysed on the same afternoon to locate and map water bodies. This has proved to be highly accurate and efficient. This is all using one of the most popular off-the-shelf drones, the Phantom 3 made by DJI. These are about the size of a shoebox, weighing a little more than a bag of sugar (about 2.6 pounds) and are used throughout the world for both leisure and commercial photography. We started off working in test locations across Zanzibar but now, with the support of the Innovative Vector Control Consortium—a non-for-profit partnership aiming to create novel solutions for preventing disease transmission—we’re widening our range to explore how this technology can be incorporated into operational malaria eliminating activities. It doesn’t stop there. We plan to incorporate the drone imagery into smartphone technology to help guide larvicide spraying teams to water bodies on the ground, and to track their progress and coverage. There’s also an exciting drive toward automatically disseminating larvicide from the drones themselves.

Despite these exciting advances, operators need to be mindful of the negative side of drones: invasion of privacy; collisions with aircraft and birdlife; their association with warfare. These are very real concerns for the public. In Zanzibar, we worked alongside village elders to show them the drones and explain exactly what we plan to use them for. We also encouraged people to gather around when we were looking at live-feed footage from the drone’s onboard camera. https://www.youtube.com/watch?time_continue=59&v=-pkmgpcNXFg Above is a collation of drone imagery recorded using a DJI Phantom 3 over a range of sites across Zanzibar.

This introduced people to our work and gave them a chance to see how drones and similar technologies, used alongside traditional indoor-based interventions, can really help to make malaria elimination in their community a reality.