How Do We Get Four Billion People Online? 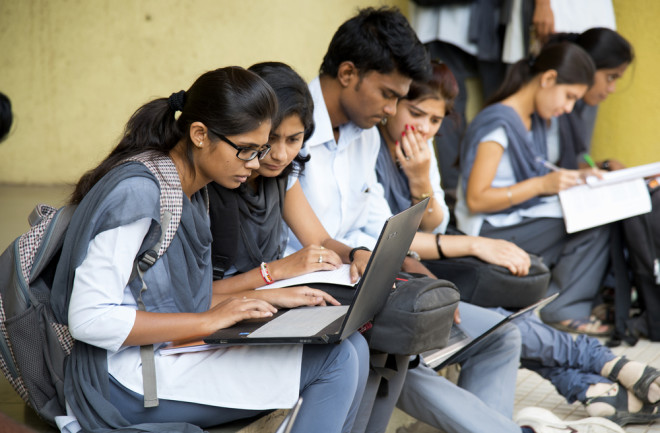 Students in India surfing the web. Many in the country still lack internet access. (Credit: CRS PHOTO) Despite the name, the World Wide Web … isn’t. Some 52 percent of the world — roughly 4 billion people, mostly women — don’t have access to the open web. This has sparked something like a new space race, featuring satellites, high altitude balloons, drones, even lasers. The rush of startups and tech companies — including SpaceX, Google, Facebook — make it only a matter of time before most humans are online. The benefits are already clear. Getting online is financially advantageous for folks in low-income regions, especially Africa and Asia, where lack of connectivity is highest. Connectedness also promotes greater participation in politics and society. “If people have access to faster internet speeds, then you will also see improvements in economic growth,” says Dhanaraj Thakur, a researcher at the Alliance for Affordable Internet, a coalition aiming to lower broadband costs. “There are specific benefits in different sectors: health, education and so on ... as long as we're talking about a particular kind of internet.” (Ideally, the open web: the unfiltered, uncensored internet many take for granted, but isn’t always available in certain regions.)

The International Telecommunication Union has nailed down few main reasons why online access remains elusive: insufficient infrastructure, lack of digital literacy and irrelevant content, such as English webpages when your native language is Amharic. But one of the biggest hitches? Cost. A survey of 58 low- and middle-income countries found just 19 boast affordable internet, defined as 2 percent or less of average monthly income for one gigabyte of mobile data. Across Africa, the 2015 average cost was more than 17.5 percent of monthly income. That’s prompted interest from tech companies. It can seem altruistic, but these endeavors are also driven by the urge to find more customers, which concerns outside groups worried about privacy, data collection and free speech. “It's not enough simply to bring the internet to a country,” says Cynthia Wong, the senior internet researcher at Human Rights Watch. “It's what kind of internet do you bring, how is it going to be regulated, and how much meaningful control and choice do people have over their experience.” Ellery Biddle is advocacy director for Global Voices, which focuses on technology and human rights. She agrees the issue isn’t just “connecting” countries. It’s about quality. “Today, it’s a matter of who has access to and benefits from that internet infrastructure,” she says. That infrastructure investment could come from tech companies, Biddle says. “But it's a much bigger and more complex investment of time, money and policy negotiation than I think they have the capacity or interest for,” she adds.

Companies have gotten creative to overcome the technological hurdles — with mixed success. In June, Facebook shuttered Project Aquila, its program of massive solar-powered drones that would’ve been beamed internet via lasers and then relayed it down to places without dedicated access. The much-hyped project ran just two test flights — during the first, a drone faced with high winds crashed, leading to a federal investigation. After that, Facebook decided building aircraft was too difficult — and irrelevant, with so many other companies developing autonomous Wi-Fi hotspots. Facebook closed their lab. And they’ve partnered with Airbus on their drones. Now they're testing plane-mounted lasers similar to Aquila’s. They’re also working on OpenCellular, an open-source, low-powered base station that Facebook hopes will connect billions more people using cellular networks. Facebook wasn’t the only tech agency to crash and burn. Back in 2014, Google's X division moved in ahead of Facebook and purchased Titan Aerospace, which made personal solar-powered drones. During Titan’s only test flight, both wings snapped off and the aircraft was destroyed on impact. The company was shut down in January 2017.

X has now switched focus to Project Loon — a balloon flotilla that bobs 12 miles above Earth, beaming 4G LTE like a cell tower. Loon was deployed after two disasters last year: once after Peru's deadly floods and again after Hurricane Maria hit Puerto Rico. They’ve (temporarily) connected more than 300,000 people, the company says. And now they’re eyeing rural Africa. Meanwhile, others are focusing their efforts on making satellite internet cheaper. By year's end, startup OneWeb aims to launch the first of a constellation of 900 little, low-orbit satellites beaming high-speed internet. SpaceX wants to launch around 4,000 satellites for the same purpose; its prototypes are doing well. A cadre of other companies, big and small, are edging in on the action. But despite these many projects, there are more roadblocks than just the ability to log on. Biddle says Facebook and other companies often overlook government presence — and things like balloons and drones can distract leadership from building infrastructure. “Some of the riskier ‘moonshot’ investments will fail and some will find a place alongside more mature access technologies,” says Nathan Kundtz, CEO of Kymeta, whose flat panel satellite antennas came on the market last year. “Ultimately, I expect that the expansion of internet access into developing countries will continue, and that it will be a force for positive economic and social development.”