Take a closer look at Elon Musk’s orbiting constellation of satellites, which are built to deliver high-speed, low-latency internet across the globe. 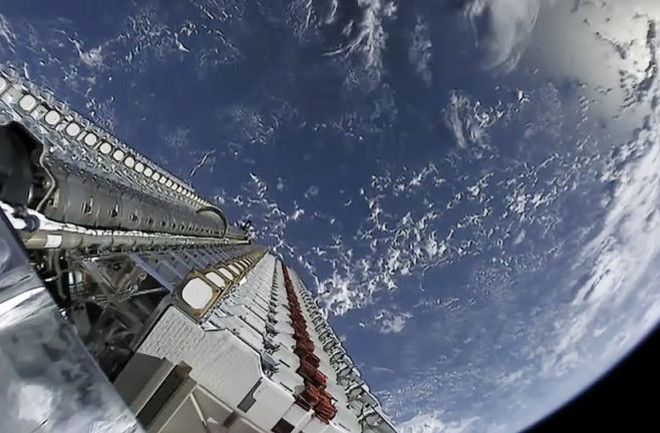 Witnessing a conga line of dozens of bright satellites marching through the night sky has surprised — and occasionally unsettled — many around the world in recent years. And as much as the sight of SpaceX's Starlink satellites passing overhead might mystify the unacquainted, exactly how they work remains a riddle to many of those who already know about the ambitious project.

The Starlink constellation, which is intended to provide high-speed internet to underserved rural areas, depends on a huge network of interlinked satellites. For the past several years, every couple weeks or so, a SpaceX Falcon 9 rocket has blasted off and carried a new batch of some 60 Starlink satellites into low-Earth orbit. As those desk-sized satellites travel to their final positions, they brightly reflect light, irking many skygazers.

Despite the attention received by SpaceX’s Starship and Crew Dragon capsule launches, Starlink has quietly become the company’s most frequently launched project. Musk frequently talks about putting humans on Mars, yet it’s clear that Starlink is a top priority — even if only to fund Musk's multi-planetary goals. Leaked documents show that by 2025, SpaceX expects to earn five times as much revenue from Starlink as it does from all other launches combined.

That potential cash is igniting a commercial space race to build the satellite-based internet that many think is the future. Companies like Amazon and OneWeb are working on their own satellite internet constellations, known as megaconstellations, too. Even China has plans for a Starlink-like project in the coming years.

So, how do satellite megaconstellations like Starlink work? And why do they need so many darn satellites?

Satellite internet can be notoriously laggy. So, to move more data with minimal delays, Starlink satellites occupy much lower orbits than traditional satellites — orbiting only some 340 miles (550 kilometers) above Earth's surface. As a result, Starlink is useful for things like video calls and online games, which challenge current space-based internet providers. Ultimately, Starlink is expected to deliver speeds up to about one gigabit per second with no caps. That's more than enough for even data-hungry households.

But that same low orbital position is also one of the main reasons why Starlink satellites shine so bright in our night sky: They're close to us.

Once launched, a Falcon 9 launch vehicle deploys its batch of 60 Starlink satellites into an initial "parking orbit" at around 270 miles (440 kilometers) above Earth. From there, the individual satellites unfurl their solar panels and slowly start to spread out around the planet. Each satellite also uses its thrusters to gradually boost itself to a higher altitude, climbing into its eventual final orbit some 100 miles (160 km) above the International Space Station's orbit. As the satellites climb, they grow dimmer, reflecting less sunlight back toward Earth.

In the past, communications satellites for things like TV utilized much higher orbits. This is because sitting relatively far from Earth makes them "visible" to satellite dishes across a larger geographical area. But because Starlink orbits closer in, the network requires thousands of satellites to provide simultaneous global coverage.

Of course, Starlink's spacecraft are much smaller than conventional satellites — dubbed smallsats — weighing a mere 550 pounds (250 kilograms) each. Some have even referred to them as flying routers. That's partly why customers must also purchase a ground-based antenna to tap into Starlink's internet service.

This antenna is confusingly branded as a "Starlink," but more commonly referred to as a “UFO on a Stick” or "Dishy McFlatface." When it's powered up, the self-pointing antenna quickly scans the sky and locks onto the nearest overhead satellite — that is, if the ambient temperature is below 122 degrees Fahrenheit, according to recent reports by ArsTechnica). Then, it seamlessly maintains that connection as each new Starlink satellite comes into view and the previous one fades beyond the horizon.

The first real batch of Starlink satellites launched in 2018 on a SpaceX Falcon 9 rocket. (Credit: SpaceX)

The Future of Megaconstellations

Originally, SpaceX planned to connect every satellite to its neighbors using lasers that would let the spacecraft communicate with one another. But the first batch of Starlink satellites launched without this ability.

So for now, service relies on a system of ground stations called gateways. These stations are positioned around the world and exchange signals with the Starlink satellites, tapping them into existing fiber-optic infrastructure. So, a user's home antenna connects to a Starlink satellite as it passes overhead, which in turn links them into the nearest gateway. As a result, in addition to their own antenna, users need to have a ground station within roughly 500 miles of their location to get service.

Things wont stay that way for long, though. Starlink engineers have already experimented with a batch of test satellites that uses lasers to communicate. Instead of connecting people to a nearby ground station, the lasers would let the satellites talk to each other directly at the speed of light, which is faster in the vacuum of space than in fiber optic cables. In a Reddit AMA ("Ask Me Anything") session, company engineers said the tech is still too expensive and challenging to manufacture in volume, but they expect it to roll out in future generations of satellites.

Of course, it wasn't too long ago that this whole project was too technically challenging to pull off. In the 1990s, several companies tried and failed, ultimately going bankrupt. Those services were hobbled by costly launches and electronics that weren’t quite ready for the task. That disappointing history forced even Musk to take a measured tone when discussing Starlink during the projects infancy.

Yet, the Starlink launches have now become so routine that last month, SpaceX marked its 100th consecutive successful Falcon 9 launch. Even with just a portion of the eventual constellation deployed, more than 10,000 customers already have been given access to a beta version of Starlink’s internet service. It’s now clear that SpaceX not only has revolutionized the rocket launch industry, but also figured out how to use those rockets to take advantage of the rapid miniaturization of modern electronics.

It's looking increasingly likely that Starlink will help solve high-speed internet problems in at least some rural areas. And with Musk planning to eventually launch hundreds of Starlink satellites with each launch of SpaceX's Starship vehicle, much of the planet could someday get its internet signal from space. At one point, the company said it was making six Starlink satellites every single day.

The lingering question now is how many competitors will follow suit, and how many satellites will ultimately make up these megaconstellations?