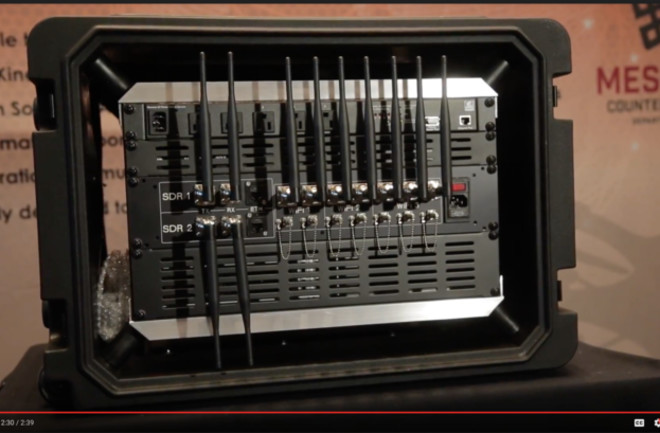 The Mesmer anti-drone technology can take control of drones that may pose a threat in civilian airspace. Credit: Department 13 Shooting down unwanted drones near a crowded sports stadium or concert can be tricky business. Even a fairly small quadcopter could cause injury to people below if it falls out of the sky because a laser weapon has burned its electronics or a jammer has disrupted its flight controls. A startup has a safer anti-drone solution for the skies above the U.S. homeland: hack a potentially dangerous drone's radio communications and take control. The startup, called Department 13, first figured out how its anti-drone technique after receiving funding from the U.S. Defense Advanced Research Projects Agency (DARPA). Department 13 initially focused on investigating the communication protocols that many devices use to exchange wireless radio communication. Its engineers realized that they could change state and behavior of devices relying on radio wave communication by injecting tiny packets of code into the radio protocol. They eventually realized their technique worked well on many of the standard protocols used by popular hobbyist drones sold online and on big box store shelves. "Once we crack a radio protocol, we basically own it," says Jonathan Hunter, CEO of Department 13 International Ltd. "We can make the drone do a precision landing, can do full telemetry by monitoring the drone's active and passive systems, or make it reverse thrust to back away." Department 13 has begun testing and marketing its anti-drone technology, called Mesmer, as a way to "control the airspace and outcome of drone engagements" above the streets and buildings of U.S. cities and towns. The bluntest way to take down a drone involves using lasers or similar directed energy weapons, but shooting a drone out of the sky risks possible collateral damage on the ground.

The Mesmer anti-drone technology with an off-the-shelf hobbyist quadcopter drone in the foreground. Credit: Department 13 Strong signals from radio jammers can overwhelm a drone's communication links with its operators, but some drones may simply fall out of the sky instead of automatically landing or returning home. In addition, jammers typically broadcast on a wide radio spectrum that can interfere with other wireless devices. Unlike the broad signal blast from jammers, Mesmer uses a low-power radio signal that avoids interfering with other wireless devices and follows the U.S. Federal Trade Commission's regulations on transmissions. At the same time, Mesmer can still works its magic in taking over drones at a range of about one kilometer (0.62 miles) in the right conditions. Anti-drone technology represents a growing market as authorities try to protect major sporting events, prisons, government buildings and crucial infrastructure such as power plants from the possible threat of drones. Overseas, the militant group Islamic State has already shown how weaponized versions of ordinary off-the-shelf drones can prove lethal during its ongoing wars in Syria and Iraq. Islamic State has turned the hobbyist drones ordinarily used for taking pictures and videos into crude aerial bombers or even flying bombs. Such weaponized drones have yet to make a serious appearance in the United States. But authorities worry about even wayward hobbyist drones piloted by clueless owners that may accidentally crash into crowds or buildings. The U.S. Federal Aviation Administration already declares "no-drone zones" around stadiums during football and baseball games. Enforcing those no-drone zones requires anti-drone technology of some sort--and preferably a method that allows authorities to hand the errant drone back to its owner in one piece if the "threat" proves more of an honest mistake. Department 13 hopes that its Mesmer system can prove competitive as one of those anti-drone technologies on the market. In June 2015, the startup demonstrated Mesmer to four U.S. government agencies. It also got itself listed as a stock on the Australian Securities Exchange, moved from its original home in Virginia to Maryland, and got on the U.S. government's radar. Department 13 became a finalist in the Countering Unauthorized Unmanned Aircraft Systems (C-UAS) Challenge held in August, 2016 and the U.S. Department of Defense's official Black Dart 2016 challenge for anti-drone technology. "We have a running joke: We’re not worried about Skynet, Skynet should be worried about us," Hunter says.